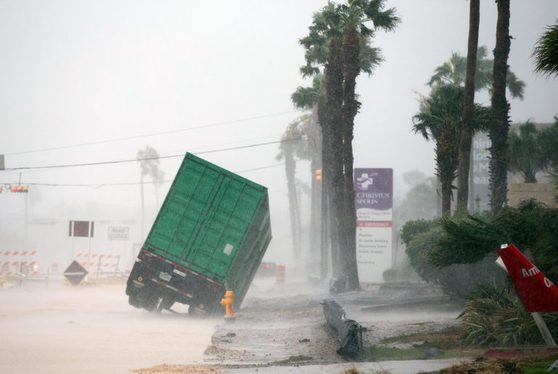 Texas' Houston has been receiving beatings from Hurricane Harvey that has destroyed anything on its path (Courtesy:Metro)
Hurricane devastation is not a new phenomenon to people in the United States. It is for its devastation capability that hurricane instill fears on people as the season approaches.
Imagine the troublesome experience following Harvey's landing in Texas on Friday into Saturday, turning Houston and suburban areas into ponds and people struggling with a fiery wind that destroys anything on its path. .
Reports show that Houston, a beautiful city is under waters, waters that Harvey has brought with its landing. And the rain that accompanying the landing does not seems subsiding yet.
It is a story of destruction. A story of people losing their homes and a story of rescues. A story about people losing all they have to hurricane and holding their lives in their hands.
Greg Abbott, the state governor, describes the Texas' experience as catastrophic. Newspapers' reports on Sunday on Texas in the in Harvey's hands explain the governor and the people of Texas' experience. Virtually all the newspapers in the country had Texas devastation as cover reports.
The reports are not so much different from what the country know about destruction, which hurricane brings anytime it is arriving. Not many people have forgotten the Sandy devastation in the North East and the stories about evacuation and the refusal of many people to evacuate or decision to ride through the danger of hurricane's and the loss of lives.
Because of the magnitude of destruction in Texas, people across the country are already gripped by fears of the hurricane season. The current Texas' experience has brought back the memory of the Sandy's experience, and no one in the North East wants a repeat of that scenario. News about water coming down with force with damaging wind is expected to continue with torrential rain into Monday, and the accumulated water is expected to exacerbate an already nasty situation.
​  There is prayer on every lip for the hurricane not to come their path this season. However, amid the apprehension is the fact that residents seem ready to evacuate anytime the danger looms, in the face of the pictures from Texas. There is a discussion already about whether there has been mandatory evacuation in Texas before Harvey's landing.
Reports say that thousands have been rescued and that rescuers are still busy rescuing people caught on Harvey's path. By the time the picture clears after the waters, the world will know more about those who have been saved and those missing.
NEWS AND FEATURES
News & Features Around The World