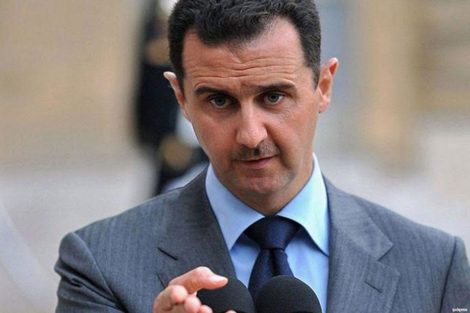 Bashir al-Assad of Syria
The fear of the Islamic State of Iraq and the Levant is real. This is attested with opposition against President Donald Trump decision to pull the United States out of Syria. There is reported opposition from majority of military officers the media interviewed on the matter.
Law makers are divided on the issue, and some front line members of Congress among Republicans law makers are  opposed to the U.S. withdrawal. Reason? The fear of the ISIS, and boosting Russia and Iran.
The White House said that the ISIS had been defeated, based President Trump's words, But the people opposed to his statement said that it may be true that the ISIS may have been decimated, its capability reduced, but that the ISIS has not been completely destroyed.
Some other opposition point to Iran's presence in and around Syria. They say for this reason it is be suicidal for the U.S. to abandon Syria for Iran to roam free. Yet some others say that President Vladimir Putin has made a statement, praising President Trump's decision on Syria, and they say that the decision will benefit Putin.
The world is well aware of the civil war in Syria and what has turned into the destruction of Syria. Putin is fighting in Syria to ensure that Bashir al-Assad is not disgraced from office by pro-democracy fighters and their supporters. So also is Iran in the country to boost support for Assad. The U.S. and allies are in Syria to stall the spread of ISIS and to ensure Assad does not use biological weapons on poor Syrians.
How long the U.S. and allies are expected to remain in Syria policing the ISIS, Iran and Putin's Russia is not clear. Does it make sense to continue to budget for policing  Iran and Russia in Syria, when it is understandable that both Iran and Russia benefit from their involvement in Syria? Would the war in Syria escalate out of control with the U.S. withdrawal?
Syria gets all its arms from Russia. Iran has regional interests to protect from which it stands to benefit. The fear that the ISIS may take over a part of Syria to declare a Caliphate is out of the equation, because its capability to achieve that aim has been decimated. The ISIS is no longer strong enough to be to feared to challenge the U.S. Putin, Tayyip Erdogan of Turkey and Assad can be trusted to push out the ISIS from having a foothold in Syria.
But will Assad stop using biological weapons on his people? Are pro-democracy fighters still stoutly in contention against Assad's leadership? Does the U.S need to continue keeping 2000 soldiers in Syria, and continue budgeting for that purpose? How much does the U.S spend to keep the boot on the ground in Syria? Does it make sense at all that the U.S. continue to budget to keep soldiers in Syria for the fear of ISIS and rivalry with Iran?
If Assad should dare use biological weapon on Syrians, he can be sure to see response from the international community. Pro-democracy fighters's fate is uncertain. But if after almost destruction of Syria, the pro-democracy group have no hope of winning should consider their efforts a loss, unless it considers entire destruction of Syria to push Assad out of power. The Congress has refused to fund the wall to reduce illegal immigration, but easily approved money for the repair of Syria.
One New York Times report says that $230 million was approved for repairs of destroyed Syria, part of $3 billion allocated in 2017 as part of foreign aid approved by Congress, but the Trump administration has refused to spend, may possibly rescind and send back to the treasury. Why should it be Americans' responsibility to rebuild Syria? The reports says it is the only way to persuade Syrians to return home.
Widget is loading comments...
NEWS AND FEATURES
News & Features Around The World