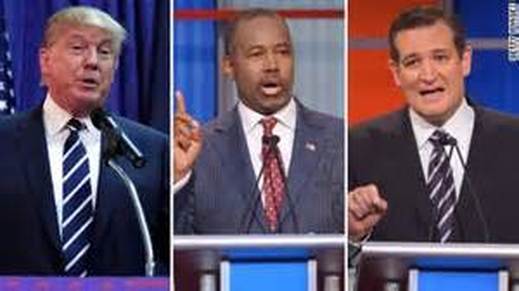 Donald Trump, Ben Carson and Ted Cruz
Wednesday morning's first news report is Senator Rand Paul's decision to end his presidential campaign after the Iowa's election results.The report has been followed by yet another news of a likely end to campaign by Senator Rick Santorum.
However, Ben Carson remains one candidate who is still in the race without a thought of ending his campaign, but whose fate has been that one of the candidates' campaign team has touted the idea around Iowa about Carson's ending his campaign, and the matter is reported to have given the candidate an advantage.
The issue of a wrongful report of an end to Carson's campaign is fast turning into damaging rounds and being mentioned as a fraud by one of the candidates.
You can call it the Iowa effect and certainly part of the acceptance and congratulating the man who has been announced as number one and then turning back to disclaim the acceptance, when confronted with the truth of the news that the winner's campaign team has spread the news of Carson's withdrawal to gain advantage.
And that has Donald Trump crying fraud!Is it not too late in the day to cry fraud, when the Iowa's election is believed to have been concluded, and the journey has moved to New Hampshire? Can the Iowa election be cancelled and a new election called there over perceived fraudulent act of one campaign team spreading falsehood against another campaign team to grab members and advanced its victory?
Carson was the first person to raise the issue of what he said the Cruz campaign did against his campaign, but he did not call it fraud, but he said it was unacceptable. The matter seemed to have cooled down and insignificant. But it has suddenly resurfaced with Trump calling it a fraud. And he is calling for the cancellation of Cruz's victory or a new election in Iowa.
Although, what is happening after the elections in Iowa can be seen as part of the effect of the elections and results in Iowa, some people are already asking questions silently, whether or not the Cruz's campaign announced infraction against Carson is ethically acceptable.
People say that politicians are capable of doing a whole lot of things to gain advantage and win an election, but they cannot say what act(s) can be defined as over the top. People also say that the development explains the extent politicians can go to get into public office.
And the question that is difficult to answer is whether the politicians do this type of thing (spreading negative rumors) to outsmart one another, for the love to serve themselves or the public? And people are asking whether this is not one of the reasons that the American public has expressed dissatisfaction with Washington insiders and one that has made them to yearn for a non-Washington insider.