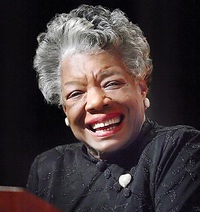 Maya Angelou
"Listen to yourself and in that quietude you might hear the voice of God," - Maya Angelou. I believe in these words, because I am a witness to God's existence; His love for humanity and that He talks to us. When I came across the words reading Maya Angelou's story, the words captivated me. Before I read Angelou's story in the Daily News, two young women had acquainted me about her, but not until after I read this line of her words did I got entranced about the life she had lived. ﻿
Early Thursday morning, I was reading Marinel Suriel's blog - 2lipsinluv.  I met Marinel in the course of work in the Big Apple as a fashion professional and a promising writer, and it was in her blog I first read about Angelou at a glance. Then in the afternoon, Louise, a graduate student of Public Relations at Hofstra University asked me on the phone whether I had Angelou's story on Global Pentorch. She described Angelou as a great writer and poet, but she had difficulties remembering the last name. I asked whether she had won a Nobel prize, she doubted it. But I told Louise it must be Angelou and that I read of her in a blog early in the morning. Louise remembered her first name when I mentioned it, but the last name was what she couldn't remember. I promised to investigate and get back to her. But it was late when I laid my hands on and read the Daily News. Reading the News story about Angelou got me back on the 2lipsinluv blog to read more about the phenomenal woman.
Marinel wrote in her blog that the woman who inspired so many to be strong; to fight for their happiness and success had died. She wrote that she had read Angelou's works in school; had influenced her and Angelou's words spoke to her as a female.  Marinel cited "Still I Rise" , "I know Why the Caged Bird Sings" and "Phenomenal Woman" as her favorite poems from Angelou's works.
"Listen to yourself and in that quietude you might hear the voice of God" are the enchanting words that I picked out of the Daily News story about Maya Angelou, and the words led me back to read more about her poems in the 2lipsinluv blog. I became more enchanted by Angelou's usage of metaphors and similes. She was really phenomenal as a woman, based on description of herself and why she was a wonder to behold in "Phenomenal Woman," a poem of five stanzas; each stanza describing her nature and construction, men's reaction when she walks into a room, identifying herself as the Phenomenal Woman, men's wonder about what they perceive in her and why her head is never bowed.
If you think the lines in Phenomenal Woman are not enchanting enough, you need to read Still I Rise. "You may write me down in history with your bitter twisted lies; you may tread me in the very dirt, but still, like dust, I will rise." Accompanying stanzas shows a personality living a life to the full, her social status and what people say about her notwithstanding and one who is ready to confront little minds who belittle others, likened herself to the air no one can stop its rise..
The caged bird with legs tied and wings clipped has only her voice for expression and it is why she sings. Angelou's message is that never allow anyone, no matter how powerful or circumstances, stand between you and your dreams. I had always thought before I read Angelou's "Why The Caged Bird Sings" that singing and dancing are two life's ordinance one should never allow life's travail take away from one's life, because they are the two features enemies and their imposed evil circumstances want to snatch away to replace with depression.
I know now that it is even possible for the enemy to cage a person, clip the wings and tie the legs, but one thing the enemy cannot take away or that we must always fight to retain is the voice.
May Maya Angelou's soul rest in peace.
Click to set custom HTML
Comment Box is loading comments...
NEWS AND FEATURES
News & Features Around The World