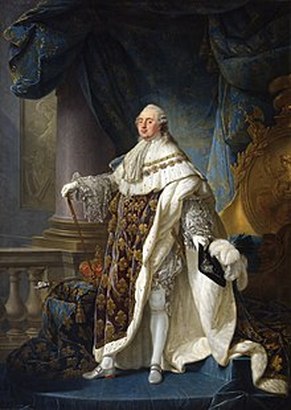 King Louis XVI of France (Courtesy: Wikipedia)
See what is happening in South Africa? Is it a case of displacement of one set of oppressors and another set of oppressors taken over? Yesterday, it was a fight against apartheid, but today the fight has continued against powers that are capturing the state.
Of course events in South Africa is a reflection of developments in all countries of the world. The rich and the powerful seize the state wealth and monopolize the wealth for their selfish ends. Research shows that the rich have always been in control and the poor are always struggle for existence.
Not only are the poor struggle for existence, they also struggle in alliance with kindhearted few among the rich to fight the rich that have seized power. Way back to the time of Jesus Christ, the fight has been established as Christ coming to save the poor and the rich got hold of him and dispensed with him. But his followers remains and increase in number.
The same was applicable to Prophet Muhammad who fled from Mecca to Medina in a flight called 'Hijra' and declared war on the apostates. The war between the rich and poor did not end with Christ and Muhammad. It surfaced again in France and led to the world's first popular French revolution.
The French revolution was followed by the American revolution. America has tried to import its democracy - a form of government that Americans pride as returning power to the poor. But events in America have proved that the poor vote in the rich into power and expect his lot to be improved.
Thanks to the founding fathers achievement toward laying a foundation for an egalitarian society, successive leaders in the United States have shown that wealth or stooping to the rich determines how a political can go in the process. When the rich place their money for a candidate to emerge victorious in an election, they do expect to be paid back in return for their investment.
And whatever happens between an elected official and those who put their money down to ensure the candidate's election is a secret between the candidate and the sponsors. The poor who have merely given their votes will have to wait until Christ's return for the gain on  their investment.
The poor have realized that most the politicians' promises are to gain their votes. Year in and year out, the poor have been complaining that these politicians return for their votes with sweet coated tongues. The game turned to if you cannot beat them join them. But the poor have little resources to do any political fight.
The poor soon discover that they have become cannon fodders for the rich to achieve their selfish political agenda. From country to country, politicians pay and allowance have sky rocketed. The poor complain that getting elected or occupying elective position has become a way to wealth, and that all new politicians do is go to the capitol to join those politicians, and get rich at the expense of the poor.
The rate of poverty has ballooned all over the world. It is on record that only very few rich individuals and kings control the world finances and wealth. The so called middle class, a struggling that has become the apex of the struggling poor's end of aspiration is being wiped of the economic arrangement and pushed back to the poverty level.
Now, many people are saying it is either you are rich or poor, because the middle class is becoming extinct. And the rate people are working to remain economically relevant does not show that the rich have any consideration for the poor, in their drive to ensure their wealth increase and not decrease.