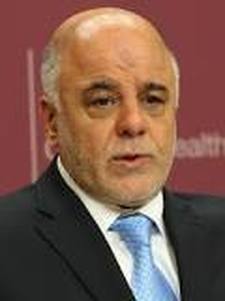 Prime Minister Haider Jawad Kadhim Al-Abadi of Iraq
The Fallujah community in Iraq is currently the epicenter of the battle between the recognized government in the country, and extremists who have taken control of the township with superior fire power. The current battle is part of the effort of the Iraq government to take back the city, just like it has been done in some other cities, since the extremists overran some of the country's cities in attempt to declare its own Caliphate or forcibly make a section of Iraq part of its Caliphate.
News reports about the battle of Fallujah have inundated observers ears for the past few days. The reports say that the people of Iraq, mostly volunteers and the country's police have surrounded Fallujah and that the battle in the city will be an epic battle, and that as the Iraq people and the police do the ground the battle, the United States military will rain bombs.  Reports said further that many residents of the city have fled and that the only people remaining there are those the extremists have refused permission to leave. Some other reports said that only the extremists and their family members and those who believe in their Caliphate remain in the city.
One report that reminds this reporter about the evil of war is the one that says that residents in the city have been denied access to food and other essential items as a way to deny the extremists continued hold on the city. It is a reminder of a tough argument between the people of the Eastern Nigeria, who reports said were denied access to essential items of survival in order to force them to surrender and what a respected Nigerian leader was quoted as having said that starvation could be used as an instrument of war.
Although, Chief Obafemi Awolowo, the Nigeria's Finance Minister, during the country's civil war, 1967-1970, was highly respected for his intellectualism and forthrightness, the Ibos of the South East still regarded him not as much for counseling the government he was a part about how to end the war that nearly brought the country to its kneels. The reports about the battle in Fallujah also remind observers of what people in the city have been eating survive in the face of the economic deprivation from the Iraq government.
In this context, can one blame the Iraq government for the economic blockade in Fallujah or blame the extremists for over running and seizing the city and consequently forcing the government in Iraq for the blockade? If this were to be the Nigerian government fighting Boko-Haram, would the U.S government allow the use of its jet bombers to bomb the extremists without reading a riot act against the country's military as engaging in unprofessional engagement for using economic blockade? Although, someone interviewed on one of the Cable news television said that the U.S military only dropped one bomb on avery active day against the extremists.