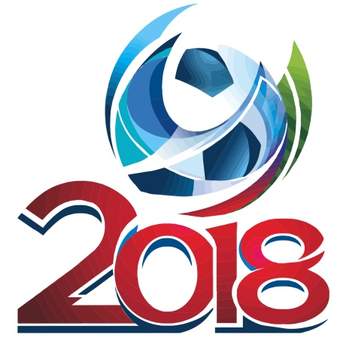 It was the Father's day joy in the air. But the World Cup's matches on this Sunday, made the day more memorable, as Father's Day enjoyment collided with watching the soccer giants in action, in the 21st FIFA World Cup tournament in Russia.
​Sudden outburst of noise from various viewing centers during the week called people's attention to the excitement World Cup, when Spain and Portugal slugged it out on Friday. Cristiano Ronaldo was in the saddle for Portugal. The trend continued on Saturday with Lionel Messi p for Argentina.
But what Ronaldo did on Friday to keep Portugal hoe bright in the opening matches by forcing Spain to a draw, Messi failed to achieve on Saturday, and forced Argentina into a draw game with Iceland.
​  These were the beginning of surprises in the 2018 World Cup. The surprises continued into Sunday, when Mexico crushed Germany, and Switzerland forced Brazil into a draw.
Late on Saturday, favorable Nigeria's team fell for 2-0 to Croatia. The Nigerian team's failure seemed to have marked the beginning of further surprises that marked Germany's destruction by Mexico. Mexico's joy at the outcome of the encounter against Germany showed that the country had achieved the unexpected with a defensive play that stunned Germany.
​A new style of defensive play appears a new trend from the South American teams. Brazil also displayed a highly unexpected defensive play against Switzerland. It seemed the only way Brazil could contain the fast paced Switzerland, if the word of the Brazil coach who said he knew Switzerland players as fast paced to be considered. Aside from playing defensive and slowing down Switzerland, Brazil players were too careful in tackles against Switzerland's robust and readiness to break bones, seeking for an equalizer after brazil's goal in the first half.
Switzerland's tough play manifested in the scoring of its goal in the opening of the second half, when the header of the ball into the net consistently pushed the Brazil's defender away for him to get the ball. Spectators were shocked the referee  over looked the push and allowed the Switzerland's goal.
​On Monday morning, spectators saw a better refereeing in the match between Sweden and South Korea. A sliding tackle by a South Korean defender over looked by the referee later turned into a penalty in favor of Sweden, after the referee left the field of play, went and looked at the situation in a VCR and returned with an offer of penalty for Sweden.
Brazilians abandoned carefulness  in tackles and dribbling few minutes to the gams end, but it was too late to turn the table against Switzerland. Observers said that if Brazil had played from the beginning of the game the way they played few minuted to the game's end, Brazil would have roasted Switzerland.
The fact that Brail's misses in from of the goalpost were not players' fault showed that the teams may go far in the tourney. How Brazil holds hungry Costa Rica in the next match will determine the way forward for the team. Costa Rica is a hard team and having lost their first match, the team is expected to be hungry in the next match against Brazil.
The same will be applicable to Germany in the next match and other teams that have lost the opportunity to claim points in their first encounter. The World Cup has just begun but already raging, given that there are countries in groups still to play their opening matches.