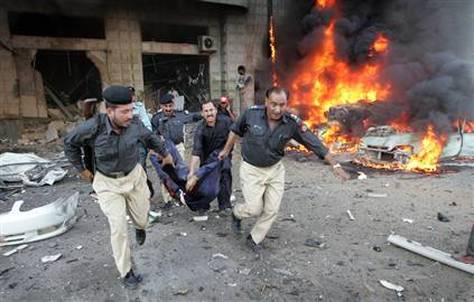 Rescue operation at the Church in Pakistan
* Kenya Forces battles Al-Shabaab terrorists inside the mall third day running.
* 68 people killed in Kenya by Al-Shabab terrorists on Saturday.
* 78 people killed by a bomb explosion in a Pakistan Church on Sunday.

The news of the devilish attack on innocent people in a Kenya mall on Saturday and a bomb attack in a Pakistan church on Sunday have attracted attention and mourning worldwide.
Many people who were unaware of Kenya attack yesterday woke on Sunday to horrific news of Al-Shabaab terrorists attack at the Nairobi mall that had claimed 59 lives. Later as people discuss the dastard event in Kenya, another news emerge that about 78 people were sent to their untimely death when a bomb exploded in a church in Pakistan.
As at the time of writing this report, some 10-15 terrorists are said to be holding close to 36 people hostage in the Kenya mall and security forces are working to take control of the mall. President Uhuru Kenyatta promised to pursue and ensure the attackers who unleashed terror on non-Moslems in Kenya do not go unpunished.
A suicide bomber detonated a bomb at an All Saints Church in north western area of Pakistan after the Church service and people were being served food. The country's interior minster, Ali Khan, said that among the dead were 34 women and 7 children. As at Sunday afternoon, bodies of 45 people were in coffins on the Church's playing ground.
A guy in Manhattan, New York, who refused to identify himself said that the irony of the events in Kenya and Pakistan was that some people went to the mall and failed to return home; while in Pakistan those who died went to the Church unaware it would be their last.
President Barack Obama has expressed condolence to Kenya's President  Kenyatta in a telephone conversation. David Cameron described the attack on Kenya as sickening.
Several foreign nationals have been counted among the dead in Kenya. Among them is a Ghanaian poet, Kofi Awoonor. Also, a nephew to Kenya president and fiancee are said to be among the dead.
Comment Form is loading comments...
NEWS AND FEATURES
News & Features Around The World