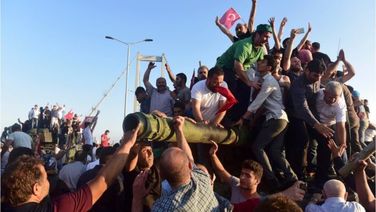 Turk atop a seized military tank (Courtesy: Reuters)
Following a coup attempt in Turkey on Friday, the country's democratically elected leader, President Tayyip Erdogan, is fighting to upstage the military that is seeking to oust him from office and kill the country's democracy.  Report said that Erdogan emerged in Istanbul, about 300 miles away from Ankara, the country's capital.
From Istanbul, Erdogan has been talking tough against the dissidents in favor of democracy. There are reports of of fighting between loyal forces and dissidents with a high number of casualties.
​    About 3000 dissidents have reportedly been arrested and still the situation in the country is dicey for democracy. Although, there are reasons to believe that the insurrection may have failed.
The country's prime minister, Binali Yildirim, described the coup as a  a "black stain on Turkish democracy." Many Turks also responded to Erdogan's call for them to stand in favor of democracy against the dissidents. A man was seen photographed standing in front of a military tank in opposition against the coup.
Soldiers were  seen surrounding a tank on the Bosporus bridge, with hands up in surrender, to forces loyal to the government. Erdogan in a speech to supporters described the coup as an act of terror.came amid  Erdogan was not wrong after all, because the attempted coup news emerged amid feverish discussions of the terror attack in Paris that claimed over 80 lives.
The news of the attempted coup with death over 150 and reported fighting in Istanbul and Ankara between dissidents and forces loyal to the government has almost succeeded in upstaging the news of the terror attack in Paris. Originally, coups are supposed to be seen as acts of terror against democracy and making Erdogan scoring a storing point in a moment of anxiety and uncertainty in the history of his presidency and Turkey's democracy.
Just few weeks ago, there was a terror attack in Istanbul airport, where over 40 people were killed. It is in the same airport that Erdogan has been speaking against dissidents and where he has described the coup as an act of terror. Reports are showing that as at Saturday morning, Erdogan is still at the airport. The airport is said to have resumed services after shutting down during the coup.
NEWS AND FEATURES
News & Features Around The World