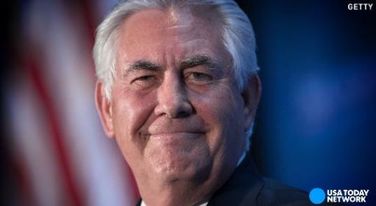 Rex Tillerson, nominated by Donald Trump, to be secretary of state.
Who is Rex Tillerson? A business executive and ExxonMobil CEO, who is about to be or may have been nominated as Secretary of State for the United States by Donald Trump.
If Trump eventually nominates Tillerson to head the State Department as news stories across the U.S. say and one that is already generating controversies, especially concerning Tillerson's so called friendship with Vladimir Putin of Russia, it will mean the beginning of new ways of conducting government business in the U.S.
Many analysts and Washington insiders - pro and anti-Trump alike, are reportedly worried by Tillerson's connections to Putin and Russia.
Many people are saying Tillerson's Russian connections raise serious questions, amid discussions about alleged Russian hacking of the last election, to favor Trump. But observers say that there has to be real prove to push the allegations that the story about Russian hacking is true and that the hacking was indeed tailored to favor Trump with the knowledge and approval of Trump, for the public to take the issue seriously.
Yes, people are saying that Tillerson's apppintment by Trump is a clear deviation from the past, when presidents pick career politicians as the nation's secretary of state. With this newness in the way of nominating a non-politician, analysts expect there will be tough work for Trump to get the approval for Tillerson from the Congress..
There have been mixed reactions from members of the Congress, with some openly expressing reservations agsinst, and others saying that Tillerson's connections around the world will help in resolving issues with other countries on thorny issues, while others are saying they will wait and see, until the time for confirmation.
But with the president elect as a top former business man and the man to be nominated secretary of state also a former business executive, people that business culture may be taking over from political culture in Washington. They are saying that it does not mean that politics will die, but that things may be done the way business people do things to get things done, compared to the way politicinas act to get things done.
People are talking about the business culture in the private sector in comparison to the sluggish attitude to work in the public sector, caused by red tapism or excessive bureacracy. From the way things are shaping up, based on the argument by Trump that there is no need for him be given secuirty briefings everyday, the Washington politicians may have to brece up for a new way of doing things.
One thing that people have not started discussing is the way of doing business by big oil companies, especially the ExxonMobil, and the lines of special interet groups and lobbyists.
A visit to the ExxonMobil website shows that the company has congratulated its chairman and chief executive officer on his nomination for the position of U.S. secretary of state. Now, will the business culture rising in government stop the common saying that politicians play politics with people's lives against doing business with people's lives to achieve results? It is a tough question.
Politics originally is essentially a buiness about managing public affairs with checks and balances, especially in a democracy. People will have to wait and see how the political culture and the new business culture will interact and succeed and to the benefit of the masses, the 99 percent against the one percent.
NEWS AND FEATURES
News & Features Around The World