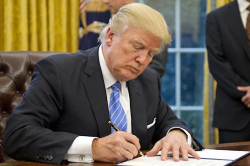 Trump signing the tax bill into law
President Donald Trump signed the tax bill into law on Friday and quickly left for Florida for the yuletide. While hard working Americans are salivating and waiting for whatever gain they will get from the new tax law, amid information that the law benefits only millionaires and corporations.
It is Christmas, and white Christmas too, snow having fallen in the night through into the early morning of Christmas. But who cares about white or any color for that matter, about Xmas? People care more about dollars and how solvent they are monetarily going into the new year.
The new year is just 7 days away. 2017 is passing away, and many people have taken stock of their financial situation in the passing year and they getting ready for a new year with better prospects. No matter how little the amount of money that will come from the new tax bill also matters.
Almost all analysis on the new tax law seem to say only millionaires and corporation are favored by the new tax law, but ordinary people who know Trump's promise during the electioneering campaign are saying it should not be so, because according to them the promise of a new tax law by Trump is one to benefit all.
But one analysis says that people earning between $50,000.00 and $75,000.00 will be having something around $900.00 added to their tax returns in 2018. $900 .00 is just a shot from $1000. However, for hard working Americans, who rely solely on their weekly or fortnightly check for survival without no free money from anywhere, a gain of $1000.00 could mean something toward managing the rent and endless bills payment.
If people earning between $50,000.00 and $75,000.00 will earn close to $1000.00 from the new tax law windfall, people earning less than $50,000.00 should be expected to gain higher amount than people earning between $50,000.00 and $75,000.00 a year. From the calculations, the windfall may not be much, but it certainly will mean something for people who take their checks after a period of hard work and all they do is return them back to the banks.
The onus will be on millionaires and corporations reported to have gained windfall from the new tax law to ensure such money is utilized towards job creation and against job flight abroad. Believing that if the tax money is channeled into creating jobs, it will at the end of the day benefit all. The news that some companies have plans to give $1000.00 Christmas bonus to their employees is not something bad.
But people are looking forward to job security and more jobs, and not filtering away an opportunity to make jobs available for all able bodied people ready to work, through unnecessary extravagance and ostentation. Hoping that giving $1000.00 to all their employees as Christmas bonus will not result into sending some of them into unemployment  queue in the new year.
Like every American, President Trump has every right to enjoy the yuletide. He has delivered on his tax codes reform promise, and managing the new tax law fallout is what we have to grapple with, as we go into the new year. Of course, there are some of us who care more about seeing white Christmas.
They have got it. And people who care about balancing their financial acts are for what matters most to them: dollars from the tax law. I can hear people saying, "Bring the money!"