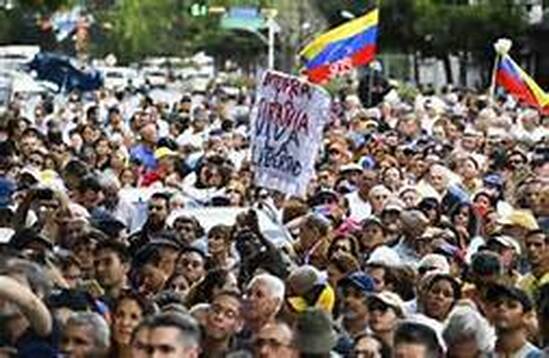 Protesters in Venezuela
An election is expected in Venezuela. Will the election lead to a desirable change in the country to make life worthy living for Venezuelans?
Obviously, Venezuelans are currently holding public demonstration against President Nicholas Maduro's socialist government protesting  to hard economic situation. Protesters and police are dueling on the streets. And people are losing their lives.
All these don't seem to matter to Maduro, who is vying for another term in office, rather than step down for a new leadership. But we all know that dictators don't step down. They instead show the world how popular they are amid turbulence and unpopularity. Maduro is not an exception.
Maduro is as expected demonstrating the negative power of incumbency by holding on to power at all cost. He wins elections against poll results and no one expects any difference or a miracle to happen in the forthcoming election. But the opposition led by the leader of the Congress, Juan Guiado, has devised a way out and the ride on the same wave with Maduro by Guiado and the people showing their anger against Maduro has led to more chaos.
On Wednesday, the United States recognized Guiado as the interim president of Venezuela. Consequently, Maduro immediately ordered the U.S. diplomats to leave the country, giving them 72 hours to do so. But the U.S. has ordered her diplomats to remain in Venezuela and not leave the country against Maduro's order.
Venezuela being in the mire is the cause of the current struggle against Maduro. How can an oil rich country with a population of  32,605,926 find itself in a situation of sudden poverty? Venezuelans see themselves as former rich but now poor. When the country was a Capitalist country, there was no poverty as the type that today bestride Venezuela. Is the embrace of Socialism the problem?
Though many Venezuelans are tired of Socialism, yet Capitalism or Socialism turn out to be irrelevant to hungry Venezuelans. If Venezuelans are not hungry and have to queue for essential commodities, Guiado would not have called on Venezuelans to embark on protests. And if the situation in the country is viable economically and Venezuelans are negatively impacted, no one would have obeyed Guiado.
America has called on Maduro to see the chaotic situation on Venezuela streets and allow for a peaceful transition. Peaceful transition to Maduro means having an election in which he would emerge the winner, and the country and the world would respect the outcome. But Venezuelans are tired of that type of peaceful transition. They want Maduro out now. But Maduro is not ready to go now.
The recognition of Guaido as interim president by the U.S. does not mean an end to the chaos in Venezuela.Some observers say that the recognition of Guiado will exacerbate the political situation in the country. Some people think the development will make the situation worse for the opposition. But Maduro has not gone for Guiado against expectations as that is bpound to worsen his own case.
Maduro will prefer an election in which he would emerge the winner and the country will continue on a journey with Venezuelans on queuing for essential commodities amid hunger.
Comment Form is loading comments...
NEWS AND FEATURES
News & Features Around The World