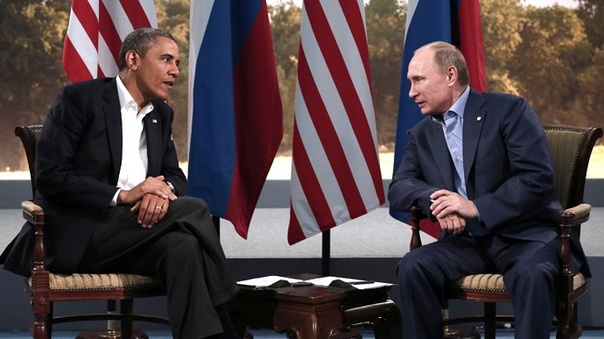 President Barack Obama and President Vladimir Putin
President Vladimir Putin of Russia has closed his deal on Crimea - making it part of Russian Federation - "without shooting a gun or taking a life," he said.
The Russian Army were swift in their entry into Crimea and barricaded Ukrainian army barracks, followed by a referendum, secession, independence and amalgamation of Crimea and Russia.
The talk on the world stage has been about Russia and Putin in Ukraine, and what kind of man is Putin. And yet no one has been able to decipher Putin's intention in Ukraine, safe that his decision determines western leaders' moves, despite his assertion that he has no beyond Crimea.
There is still apprehension that Putin may have a plan to annex the eastern part of Ukraine.
The Russians moved into Crimea. For one week, Putin was silent, while Western leaders asked Russia to withdraw its soldiers from Ukraine or face economic sanctions. And when Putin spoke, he merely said Russia was in Crimea at the request of the people for protection against onslaught of new leaders in Kiev. Events moved faster with election of a new Crimean leader and followed by the announcement of a referendum. Western leaders chorusing of sanctions and possible expulsion of Russia from G8 became louder. But Putin was careless. A New York Times report said he had long time ago told the oligarchs in Russia to bring home their investments in the West because of possibility of political issues capable of dovetailing into the West going after such investments, and that the fear of loss of such investments hardly worried Putin and could not threaten his power.
As he announces the independence of Crimea from Ukraine and the amalgamation with Russia, he describes Russia as an independent nation with interaction with like minded countries. Putin is not worried about sanctions upon sanctions being announced by the West and not even the threat of Russia's  expulsion from the G-8 group.
There is a little bit of similarity and dissimilarity in Putin's thoughts and that of President Barack Obama. Like Obama, Putin expressed opposition to some of the United States' military involvement abroad even alongside NATO. He mentioned Iraq, Afghanistan and Yugoslavia. But in this, it is only in iraq that he scores great, aligning with the current US administration's decision against dabbling into other country's internal affairs, unless in agreement with NATO.
However, unlike Obama, Putin does not believe in waiting for other countries to act as an independent nation. The one opportunity the current administration in the US had for an independent intervention in Syria was taken away by Putin through hard diplomatic maneuver in the UN, and he smartly made Bashir al- Assad submitted to destruction of Syria's nuclear weapons than humiliation of facing America's gun power.
When Edward Snowden was caught between arrest in Hong Kong and entering Russia, Putin said he was not involved in the interactions. Snowden sneaked into Russia and was granted asylum there. Putin said the US officials should not blame him but themselves for failing to get Snowden in Hong Kong, for inability to act faster. He later told the world that Russia and the US has no treaty about handing over fugitives, despite John Kerry's assertion to the contrary.
It is the second time he is leading of his country. First as a prime minister and now the president. People talk about him as a former KGB operative who is tough-minded and goes for what he wants with calculation for minimal damage or readiness to accommodate whatever damage his decision may cause. When he engages President Obama one on one, he looks directly into the Obama's eyes like rookie journalists are trained to look their interviewees in the eyes.
Puitn has become an intrigue and enigma, whom people are busy working to decipher. Some think- rightly or wrongly - that he is a rogue. Others say you don't describe a guy who is exercising power with gusto a thug, but power aficionado.
NEWS AND FEATURES
News & Features Around The World