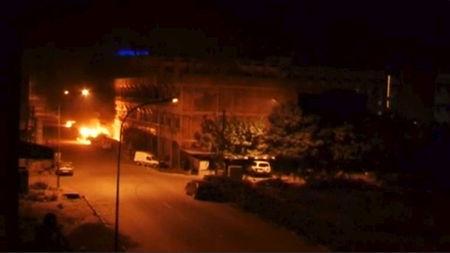 A picture of the latest attack in Quagadougou (Courtesy:Reuters)
About 23 people were killed in a luxury hotel in Quagadougou, the capital city of Burkina-Faso in West Africa, on Saturday, with another 50 people injured.
A set of Al-Queda terrorists that call itself AQIM  (Al-Queda in the Maghreb) reportedly opened fire and held people there hostage had accepted responsibility for the attack.
Information revealed that trouble started when a woman wearing a dreadlock, held a gun ran, ran towards the hotel and went berserk with a cry of Allahu Akbar - God is Great.
Reports said that there are foreigners from 18 countries among the dead and the injured. With the help of the French security forces, Burkina Faso security forces reportedly freed about 100 hostages and took the hotel back from the terrorists.
It is the second time within three months that the Al-Queda terrorists have struck and have killed innocent people in luxury hotels the West Africa. The first attack on a luxury hotel in November 2015 happened in Bamako, the capital city of Mali, the next door neighbor to Burkina-Faso and reportedly claimed 19 lives.
Observers said that visitors to Mali and Burkina-Faso and indeed the entire West Africa are bound to note the dangerous trend in luxury hotels around there as having become terrorists' targets, and that there will be fear and consequent avoidance of luxury hotels in the area, with the hotels turning into a traps and are lethal for innocent visitors.
NEWS AND FEATURES
News & Features Around The World