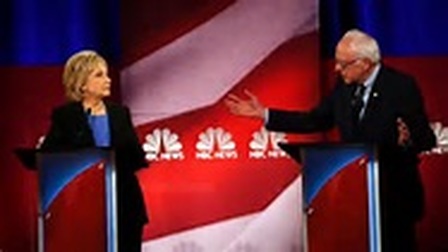 Clinton and Sanders on Sunday night
To whose benefit is a debate held in the night, when most Americans are asleep? Is it to the benefit of American people, to the Democratic Party or to any of the candidates?
This a question that follows the Democratic Party Presidential debate of Sunday night, between Hillary Clinton and Bernie Sanders.
Many observers who stayed up late to watch the debate said that it was the type of debate that should have been aired at a time majority of Americans were not on their beds.
One of the major highlights of the debate was about the number of Americans who are in jail. Bernie Sanders said he would work toward reducing the number of Americans in jail as a result of 1994 crime reduction law which both himself and Hillary Clinton voted for. Both presidential contestants on the platform of the Democratic party agreed that they both voted for the law, which according to them has positive and negative sides, but that the negative side is the law's effect in raising the number of black people in jail.
Observers believe that the question asked  by Don Lemon may have rattled both Clinton and Sanders, because majority of black people rally around the Democratic Party as the party that tends to their needs. Sanders attempted to distance himself from responsibility for the onslaught the law represents on the black population by saying that if he had not voted for the law due to its positive side of protecting women against abuse, Clinton would say today that he is anti-women protection.
When Clinton answered the question by mentioning solutions she will offer to curb the law's effect on the black population as a president, Lemon insisted that Clinton should address the question whether the black population should stilt trust her in view of the effect of the law she voted for in 1994. Whether Clinton answered the question right or not, that one question was the highlight of the Democratic Party's debate between Clinton and Sanders and hosted in Michigan by CNN on Sunday night.
As interesting that the debate was, one question most observers asked was why the debate schedule fell in the night, when most Americans were asleep. One of the persons interviewed by Global Pentorch said that he arrived his home at 1230 a.m and found that  the debate was in progress, and asked why the hell this debate was in the night. He said he switched off his television at about 01:40 a.m and went to bed, because he was tired and needed to sleep to be ready for Monday's work.
Mark Atkins, another observer, said that he watched the debate and wondered about the reason the debate was held that late in the night. He said that the debate was so important on the issues addressed, but that many Americans who should have been up to watch the debate were already asleep.
It is evident that airing the debate so late when most people were on bed benefits the Democratic Party as a party to continue to be seeing as a party that takes care of the poor and black people, when in fact its two candidates have voted for a bill that is responsible for a large percentage of black population in jail.
NEWS AND FEATURES
News & Features Around The World