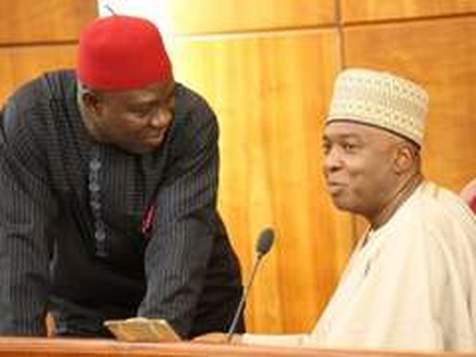 Dino Melaye and Bukola Saraki
It is too early to say that Nigerians politicians are crooks or thieves or criminals. But the trend of police actions against members of the legislature is showing a possibility of a faceless power, acting in a manner to give the country's politicians the unenviable tag of criminality.
The latest information from Nigeria that the president of the country's senate, Dr. Bukola Saraki has been invited by the police in connection to a robbery case in Offa must be troubling for curious observers of political events in the country.
Senator Dino Melaye case was the first that caught the world's attention. The police said he was wanted in connection with a criminal case in Kogi State. Police efforts to get Melaye from Abuja to Kogi State turned into a fiasco. It turned out that at the time Melaye was pursued by the police, he was supposed to be campaigning against a recall process in Kogi State. The recall election held without him, but he was fortunate he had well informed electorate on his side. His traducers lost and unable to get rid of Melaye from the legislature.
It is not a secret that Senator Melaye had fought in the senate as a colleague of Dr. Saraki with a robust support during an earlier effort by the senate president's enemies to get rid of Dr. Saraki with dusted up charges, over Dr, Saraki's defeat of the candidate of his party's nominee for the senate president's seat.
Dusted up charges because they were outdated charges that had seated in the storage and became useless that the power that was up against the Dr. thought could be used to ridicule the guy for proving to be political wiser and smarter. The same power was  noted went after Melaye with a crime allegation, using the police to pursue him from Abuja to Lokoja. The world has not finished talking about Melaye's experience, the same police is out with a similar case of criminality against the Dr. Saraki.
There must be someone with a case of yet to be diagnosed bipolar in the Nigeria's seat of power in Abuja, whose action seems to be careless of whatever happens to Nigeria, and careless too that there are people who can read between the lines that all these crime allegations Melaye and Saraki are nothing, but political persecution of first order.
What will be the gain of the power in Abuja, for working to destroy Saraki and Melaye between now and the next presidential election in 2019 at all cost, when the power has much robust and dangerous opposition to contend, coming from a former military head of state and a two term president?
The picture of the fight over political seat in Nigeria has gone beyond scary to a very dangerous  and a person with his or her senses will have nothing to do with this than stay at a distance to watch the deadly encounters. It is the police that is talking and pursuing these shows for the public to see. Understandably, someone must be remote controlling the police.
Accepted that politicians have tendency to be corrupt and Nigerian politicians like their counterparts around the world are known to be corrupt, it is still not to the level of conspiring with armed robbers, to attack those they have sworn to protect and defend. I don't live in Nigeria. However, looking at the consistency of the accusations of the power at the center against Saraki and one of his major supporters in the senate, the allegation against these men is political.