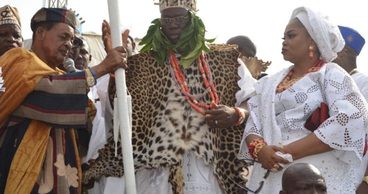 Here, Adams is installed as Are Ona Kakanfo
Gani Adams, the leader of Oodua, a popular Yoruba group in Nigeria, has been installed as the new Aare Ona Kakanfo of Yorubaland by Oba Lamidi Adeyemi of Oyo, news reports said. Aare Ona Kakanfo is a popular title in Yorubaland, given to any man perceived as brave and capable of defense of the land, as generalissimo.
But the history of the past Aare Ona Kakanfo title holders is not one that gives room to cheer anyone stepping into this chieftaincy shoes without trepidation. It instead raises a question about why anyone will knowingly accepts the trouble.
The last three Aare Ona Kakanfo title holders' struggle and fatal ends give cause to analyze their time, the end of their lives, and hoping that with the current holder's reverence before the throne of God at a Celestail Church, as reported in the news, that his time would usher a change to how Aare Ona Kakanfo leaves this earth.
The first Kakanfo title holder, most popular in modern history was Afonja. He was station in Ilorin to ward off the Fulanis, who were then on a conquering battle from the North before the history of modern Nigeria. He was reported to have betrayed the cause of protecting his people and he consequently committed suicide.
Ladoke Aknitola was another popular and fiery Kakanfo. He was deputy leader of the Action Group immediately after Nigeria's independence from the colonial masters. He challenged Obafemi Awolowo to the leadership of the Action Group, after the former returned from the prison, following his prosecution by the Federal Government for treasonable felonies. Akintola's life ended with the first military coup. He was one fo the top political leaders killed by the coup plotters in a daring raid in his Ibadan home.
The third Kakanfo was Baosrun M.K.O Abiola, a popular publisher and politician, who won a presidential election, but never allowed to be president by his own closest friends from the North of the country. Abiola died the day he was slated to be released from prison to pave way for possibility of freedom in or outside in the country, and to discuss possibility of taking part in the country's governance. 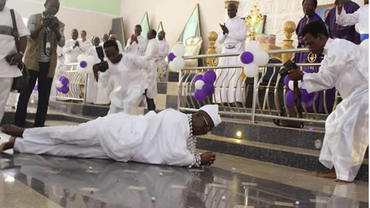 Here, he reverences God after his installation as Are Ona Kakanfo (Courtesy:PunchNewspapers)
The third Kakanfo was Basorun M.K.O Abiola, a popular publisher and politician, who won a presidential election, but never allowed to be president by his own closest friends from the North of the country. Abiola died the day he was slated to be released from prison to pave way for possibility of freedom in or outside in the country, and to discuss possibility of taking part in the country's governance.
Aside from the history of these three past Aare Ona Kakanfo title holders, the history of other past title holders as contained in Yoruba Traditional Cultural Renaissance, does not allow room for peace of mind. One will think that whoever is offered the title will be allowed access to the history of past title holders about their battles, how their battles affected their families and how those battles led to unceremonial termination of their own lives.
No one knows tomorrow. It is the reason one will not say anything about what will become of anyone's life, especially given the possibility of the effect that modernism can have on an age old tradition. It is why seeing Adam's photograph in reverence before the altar of Celestial Church is gladening and assuring.
But the question remains about the possibility of the Aare Ona Kakanfo title holder ending life peacefully and why anyone with the knowledge of the history will accept a title seen as more than  trouble. Will the novelty of an Are Ona Kakanfo reverencing God after installation change the cause of history concerning the title?
One cannot stop asking the same question. Unquestionably, Adams has made history with his reverence for God. Perhaps, for the realization of what the title constitutes, and not just because the Church leader prophesied, according to news reports, that he would get the title, and the title came two weeks after the prophesy.
Widget is loading comments...
NEWS AND FEATURES
News & Features Around The World