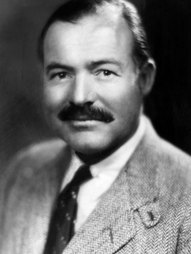 Ernest Hemingway
The impotence in discourse here is not what makes a man looks like a whimp before a woman. Agreeably, impotence comes in various forms characterizing weakness. But the most popular one known to people is when a man is lacking the ability to show a woman that he is indeed a man. One can never know about the wickedness of sexual impotence until one has seen or read about a man, who has made a woman's affection nought for inability to give it to her and make her happy.  Let us turn to Ernest Hemmingway in this regard for a tutorial in his book "The Sun Also Rise."
Brett is in love with Jake, but Jake cannot give her what she really wants as a woman. Jake and Brett both know his problem; but Brett loves Jake and the circumstance makes her life miserable. The story line shows that Jake has been a victim of a war. He is potent before going to war, but returns impotent. But life is sweet for Jake as a go-getter and a journalist among American migrants in Paris. Both Jake and Brett were victims of war.

Some readers say Brett was a foreshadow of the modern woman - free and savor good life in good company. But not many people consider the fact that Brett's lifestyle in " The Sun Also Rises" was caused by circumstance beyond her control.
Brett lost her first husband, Lord Ashley, whom she met and married during the war to  dysentery. And the next man she fell in love, Jake, has had his sexual organ zapped. And Brett had no choice than moving and strolling between men for her needs much against her wish. Showing that war called 'The Red Animal' in Stephen Crane's "The Red Badge of Courage" is nothing but a destroyer, and an antithesis to humanity. It took away Jake's happiness forever, like it had taken away the joy of so many others in different forms. And Jake could not give the joy that has been taken away to Brett. What he had remaining was a semblance of himself and something that looked like happiness that was not really it, sourced through excessive alcohol consumption. It explains why Thomas More wrote his "Utopia", a treatise against war and kings's love for war, the consequences of war to humanity,  what the society stands to gain from peaceful co-existence and showcased places like Nolander, where peaceful co-existence without war was in vogue.
Thomas More was beheaded, because the king whom he worked for thought he had gone beyond his mandatory employment to suggest that the king should abandon his love for war.
One should think that the days of the kings is different from these days of modern presidents, who are educated in comparison to the kings who mostly inherit their thrones, not based on faculty but tradition. The selection of presidents is based not on tradition, but on reason and approval of the populace, who believe in their elected leaders' faculty as unquestionable. But modern presidents like the kings of yore are becoming like the kings in war engagement for lack of time and understanding to sit down together, brainstorm on how to manage the crisis before them without resorting to war.
These modern presidents need to read Beowulf for them to understand the evil of vengeance and its capability to deviate a society. They need to read various literature that have been written on wars like Hemingway's "Farewell to Arms". They need to know that to be proactive is about doing things to avoid grievous circumstances like the one that has been created between the civilized world and militants seeking to destroy civilization. They need to ask questions about the genesis of militants grouse against modern civilization and what peaceful means are available to resolve the impasse than resulting to war.
Osama has been taken out, and yet the war with militants has not stopped. The militants feel they have to avenge their leader's death. And the killing of their leader has been on avenging the death of about 4000 innocent souls in New York. In avenging the death of the 4000, a war against Iraq came into the fray. The war was unnecessary anyway. But innocent souls had perished on both side of the conflict, apart from Saddam Hussein.
The militants are still waging war against their own land working to establish a Caliphate, and the only response civilized presidents have as a response is to wage another war to liberate a section of the populace. A president preached something like a sermon to his people that helping Iraq would go beyond dropping food and aid. He said there was a need for security assistance, and that means if it requires fighting again in Iraq his country would not hesitate. I say like Hemingway, farewell to arms and stop creating wicked impotence in young lives. Farewell to arms.