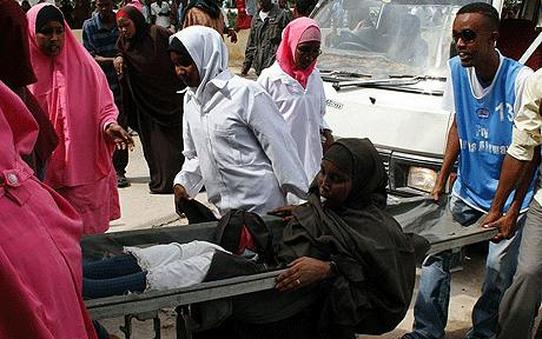 An injured woamn on the way to hospital as fighting rages in Mogadishu(www.telegragh.co.uk)
A Somalian MP and his driver were killed on Tuesday by Al-Shabaab terrorists in a drive by shooting in Mogadishu, according to widespread news reports. Uganda is on terror alert. The United Kingdom and the United States are on terror alert based on intelligence information.
The Israelis have put its army on alert over charged atmosphere between it and the Palestinians following killing of teens on both side of Israel and Palestine. Boko-Haram has continued its killing in the North East of Nigeria with freedom unlimited, occasionally hitting targets in the Federal Capital Territory in Abuja and the North Central area of the country.
There is a reminder in news report of the havoc terrorists caused in Uganda in 2010, when they hit a soccer watching center and killed dozens of innocent people.The same scenario was repeated in Nigeria recently and the fear of terror had made the government in Nigeria urged people to watch soccer in their homes and avoid the watching centers.
Someone said he has not seen vagabonds worse than terrorists, targeting soccer watching centers and markets and wrecking havoc on innocent people. He said the terrorist have turned the world upside down and the fear of the evil they wrought has put everyone on alert. Now if one wakes up in the morning, you don't only have to look out for weather report, one has to seek information on terror alert as well.
It has become an order that terrorists fight to take over an entire territories and killing people like animals. It is one development that has made them apostates because in any recognized universal religion, people have respect for human lives and prayers are offered before animals are killed. But these terrorists have no respect for human lives. They seek blood anywhere and anyhow they can find it. The Taliban has been coveting Afghanistan, and Al-Shabaab Somalia. Last week, David Cameron tired to convince Britons the reason Britain should help counter the terror spread in Iraq toward protection of the homeland amid increasing cases of home grown terrorists going the evil club abroad.
Terrorists have asked Nigeria to embrace Sharia and they are waging war of attrition, because Nigerians are not ready to embrace blood cuddling lifestyle. The terrorists are over-running Iraq after they have failed to unseat Bashir al-Assad. Terrorists in Nigeria and Somalia are better armed than government security forces. In Ukraine, they are seeking independence from the government in Kiev. It is not very clear whether the fighters against Kiev are freedom fighters or terrorists. But the Kiev government and their supporters called the separatists east of Ukraine terrorists. Observers think there is a need to make clarification on what the separatists in the of Ukraine represents, so the world don't make a mistake calling freedom fighters a name they should not be called.
Should the separatists in East Ukraine be called terrorists, because they disagree with Kiev and want to go away on their own or join Russia? If they are called terrorists, are we not confusing the world of terrorists with those of others seeking self-determination?
HTML Comment Box is loading comments...
NEWS AND FEATURES
News & Features Around The World