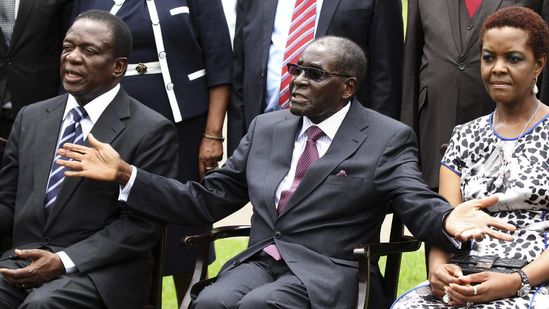 Mwangwagwa, Robert and Grace Mugabe
Robert Mugabe has seized to be president of Zimbabwe, following his resignation on Tuesday after one week of overture from the army for his resignation. After 37 years as leader of his country from independence, Mugabe allowed himself to be booed out of office.
The drama began over power tussle between her former excellency Grace Mugabe and the Robert Mugabe's deputy, Emmerson Mwangwagwa. Formally, Mwangwagwa is the right person to succeed Mugabe as leader of the ruling party and president of the country.
But Grace Mugabe's ambition to succeed her husband as president and leader of the ruling party and Mugabe's agreement to his wife's ambition unsettled the relationship between the president and his deputy. A long drama of days of long knife unfolded between Grace Mugabe and Mwangwagwa, climaxing in a sickness of the latter and rumor that he might have been poisoned by the former.
Mwangwagwa allayed the public's fears that he might have been poisoned by the president's wife in her stride to ensure no one stands between her and her ambition to succeed her husband in office. Eventually, Mwangwagwa was systematically removed from two ministerial offices that he held along with the deputy president's portfolio, before he was eventually kicked out of office as deputy president one week prior to the army's intervention.
Robert and Grace Mugabe underrated  Mwangwagwa's influence among the top military officers, aside from the immorality of the latter's ambition, which might have naturally pitched the army against her and the husband.
The world has seen the end of a political crisis that almost seek to swallow Zimbabwe. Without the political crisis over the succession disagreement among the people in the house, the world would have known that Zimbabweans only tolerated their old president and that life has become unbearable for majority of them. Imagine how they trooped out in large number in protest and asked Mugabe to quit, enough for Mugabe to see that he no longer command respect in the country.