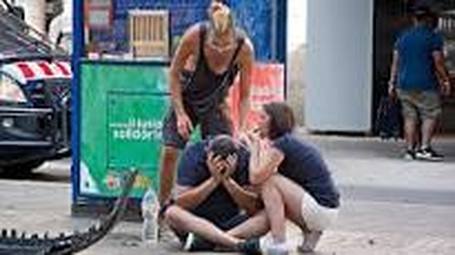 Photo of people at the scene in Barcelona
13 innocent people were killed and almost 100 injured  in a terror attack in Barcelona on Thursday by a van driven into a crowd.
Police said that the intention of the attackers was to kill as many people as possible. The driver of the van sprinted away from the scene, while two arrests, a Spanish and a Moroccan were made.
Authorities say they expect the death toll to rise, as investigations into the terror attack expand.
Obviously, the use of truck, vans and cars is becoming permanent as weapons by terrorists, who seek people to kill encouraged by the evil ideology of their belief. Although, the ISIS has claimed responsibility for the Barcelona attack, some analysts are saying that the evil organization is reaping where it has not sewn to enhance its own image in the world of bloodletting.
The attack on Thursday had been linked to another explosion attack on Wednesday in which one person was killed and reduced a house to rubble. The house reduced to rubble was reportedly a bomb making house, and and that bombs from the house could have been used in Thursday's attack if terrorists' plans had not gone awry.
A woman in New York on seeing the number of bodies on the floor during the initial report of the news of Thursday's attack and the news said at least one person dead, objected to to the report that the attack must have claimed more than one person. Truly, the picture on television screen showed many people on the floor being helped by first aid givers and and blood stains were seen on the floor.
Eventually, the official truth was amended to reflect truth about the number of human bodies on the floor. The world has come to the understanding that tight security and inability of terrorists to break through the usual targets have forced them to turn to the use of moving vehicles to mow down innocent people.
NEWS AND FEATURES
News & Features Around The World