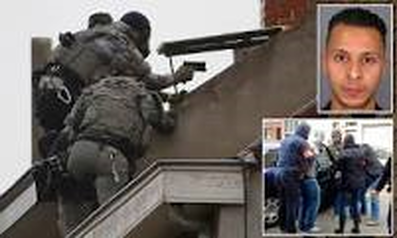 Saleh Abdeslam, the terror suspect in the murder of over 130 people in Paris recent terror attack was arrested in Belgium arrested in Belgium on Friday, news report said. Television cameras showed Belgium police fully armed pulled Abdeslam into a small car, after about 126 days in the lam. There were shootings and explosion in the bid to pick up their man.
The pictures of the Abdeslam's arrest by the Belgium's police easily reminds observers of the disruptor that terrorism has become around the world. Just a week ago, terror struck in a hotel in Ivory Coast, West Africa. Before the Ivory Coast's attack, there had been two separate attacks in hotels in Mali and Burkina Faso. Later, the Boko Haram that the Nigerian authorities said had been largely defeated killed 24 people in a Mosque in Maiduguri.
Just as the report about the terror arrests that included the Friday's episode in Brussels emerged, reports said that the UC's assailant in the United States had been linked to having been inspired by the ISIS. Information from a defected ISIS member is also said to have revealed during an interview he could not live with getting Islamized aspect of the ISIS's conversion of its members.
Boko Haram in Nigeria says it is fighting an Islamic Jihad. Same is applicable to terror fighters in Somalia. Of course, Al-Queda has never hidden the truth that it is also carrying out Islamic Jihad against regular Moslems' position. People in the South of Nigeria pray everyday for Boko Haram to penetrate the south of the country, because of the fear of unnecessary death and disruptions that terrorism has become. People in Kenya also believe that the killings that the Somalian terrors carry out in Kenya is unwarranted, because no on likes to get killed or face the useless disruption from terrorism
Hotel business in West African major cities will undoubtedly be affected by the current attacks on hotels in that part of the continent. The same is applicable to the western countries, where various governments think that terrorism is being waged against their countries because of hatred of the culture of freedom an decency in comparison to the one in the lands, where terrorists are imported to attack terror targets. Analysts believe that terrorism bleeds, as people will say that the intention of Al-Queda's attack on the World Trade center is to bleed the American economy.
Lots of resources have been diverted into fighting what is now called Islamic terrorism. There is a major argument among American politicians about the need to re-divert enormous resource, which terrorism has taken away from the country back to the country, to make the country great again. No one has said what would be done to address the war against terror, when resources that terror has taken away is returned. Bernie Sanders has also talked about de-militarizing the police to give it a human face, as a way of saving people from unwarranted incessant police killings.
But people have asked what happens to the protection against terrorism, when the police is de-militarized and whether the police will have to fight terror with sticks. Lori Hinnant of the Associated Press, reporting on the Fox News television said that it is not clear whether the Abdelsam will talk or cooperate with the police in unraveling the evil plans that led to the Paris killings. The French President Hollande said that the Paris terror attack may have involved deep conspiracy.
But many people are saying that the world knows the sources of terror and the belief that terrorists are propagating. The problem, they say is the fear of saying truth in the confrontation of the evil, despite the evil effect of terrorism on human society. and the only presidential candidate in the U.S, who said that there s a need to temporarily stop immigration from the Arab world - meaning the Islamic World - until elected representatives in his country and Islamic countries leaders meet and proffer permanent solution to terror has been reported out of context as asking for permanent ban all Moslems coming to the U.S, and it is being reported that Moslems are saying the presidential candidate hate them.
Many people are saying as a result that the development has led to the Republican Party's fight for survival to ostracize a candidate many people think is anti-Moslem, proving the power of religion as an Opium and religion's destructive tendency, because of its power to obviate human's ability to reason, when their religion is under scrutiny. Politicians know how to fight for themselves, but tell us they are fighting for us, embracing our religion to gain our votes, doing nothing they know will deprive them our votes, careless of the danger that terror represents to our lives as a community.