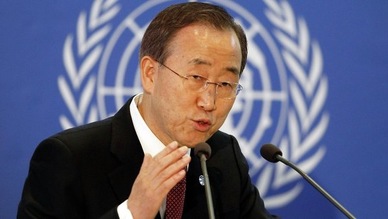 When there is a problem, it is necessary to work toward a solution. To systematically seek a solution to a problem will require a research toward establishing the cause of the problem and then seek to work toward a solution.
Undoubtedly, ethnocentrism has played a role in making the world become what it  is today - one part claiming to civilized and another part being viewed as uncivilized, which should not have arisen, if the problem has been handled with deeper reflection beyond military engagement and from being allowed to balloon to an unmanageable proportion that it has become.
The main architect of the problem, Osama bin Laden, is no longer here. We all know about his demise in 2011. Though, he is gone, but the his evil is still to be extinguished. Research had shown that Laden was born into a wealthy family; he went to university in Saudi Arabia and his first foray into politics and diplomacy was his antagonism against the Soviet Union and throwing his support in favor of the Taliban in Afghanistan with a Mujahadeen. He accused main leader of Islam as having sold out. He later turned his attention to the United States; the ways of life in the United States and other western countries and abhorrence for the Jews control of affairs in the US.
He had joined and financed a Mujahadeen and he declared a war against those he considered as apostates. Was he a Moslem? He was born a Moslem and his family was close to the Saudi Arabia royalty, but he personally seemed to have recognized the Taliban Moslems against the Saudi Arabia royalty. And he lived and died in Pakistan. He was  the architect of the attack on World Trade Center, the root of further crisis that had gripped the world with the war in Iraq. The management of the crisis over the attack on the WTC spilled into an effort to ensure that Saddam Hussein did not have the means to attack the western countries, brought Laden's statement that they were against our ways of life and not us, became a mismanaged affair, leading to a war of two cultures.
Rather than seen Laden as the architect of the crisis as President Barack Obama had once said, the western powers wrongly went against Iraq over  non-existence weapons of  mass destruction.  The ethnocentrism politics, rather than demonstrate a superior knowledge about cultures has continued, and the western powers mismanaged the Iraq war and allowed various Mujahadeen to use it as an opportunity to seek spheres of influence. The ISIS came into existence from the local Iraq politics used by the coalition forces to get rid of Hussein. And when the Syrian problem began, members of the ISIS were part of the coalition of freedom fighters against Bashir al Assad. When Assad said his opponents were terrorists, western powers turned deaf ears. Some of them went ahead and began to arm those described as moderates among the ISIS. (To be continued)
NEWS AND FEATURES
News & Features Around The World