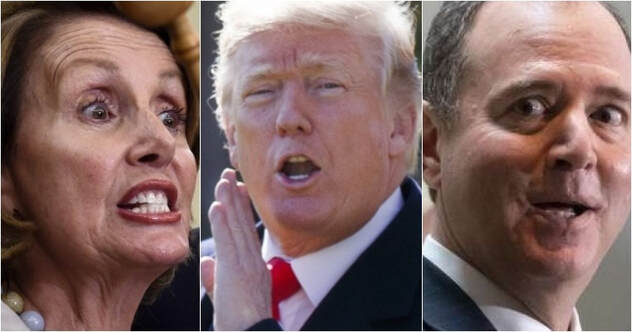 nancy Pelosi, Donald Trump and Adam Schiff
When two children are cutting a tree in a forest, the elders know the direction that the tree will fall, is an African proverb that is applicable in the case of the Democrats' attempt to remove Trump from office.
Many observers of the impeachment case against President Donald Trump by the Democratic Party led House, have expressed skepticism about the ability of the House to succeed in its efforts to impeach and remove the president from office.
The reason for skepticism is that the House has the power to impeach, but they say the House might lack the power to remove the president from office, because of the Democratic Party's lack of the number to finish the job in the senate. Unable to bare the loss from Robert Mueller's investigation, the Democrats wanted another way so quickly to fulfill their dream of removing Trump from office, a dream they never hid since the day that Trump defeated in the 2016 election.
With reports that President Trump is close to receiving a bill of clean health from the senate following impeachment managers inability to obtain additional witnesses appearance to convince the senate that truly trump commits the offence and that his act is impeachable, looks like it is coming to fulfillment that the words of the elders are words of wisdom. Apparently, one of the problems that has militated against the impeachment managers' efforts is Speaker Nancy Pelosi's embargo of the impeachment articles for about four weeks after the House has concluded the impeachment hearing.
People are saying that Trump's eventual acquittal will mean that the House has failed and the reason is that the senators mostly in the Republican Party are saying that the House have failed to complete its investigative job and wants the senate to complete the job for it. Moreover, world like bribery and extortion that featured very well in the House proceeding disappeared and replaced with abuse of power reinforced with second article about the obstruction of Congress.
One of the Trump's defense lawyers said listed the number of people investigated in the House and they (Trump's lawyers) were not allowed to cross-examine. A reminder about how Trump then instructed White House officials not to cooperate or submit to the House impeachment investigation, because he said as an accused he was not allowed to be represented. And instead of which the House should go to court to  compel those the House wanted to investigate to submit themselves, the House became a judge by declaring its investigative work was obstructed.
Did not the Democrats see the impossibility ahead of them inn their pursuit to remove Trump based on the numbers in the senate and that it would be a near impossible feat to achieve with the Republicans fully behind Trump's presidency and that if they would do it they should have the support of the Republicans in a bipartisan mode? And why did they decided at all to do it with the way things were from the beginning? They wanted to hold Trump accountable!
Why did they think that they could remove Trump from office if the Republicans failed in removing Bill Clinton from office after his own in impeachment in 1999? Do they think they are more patriotic than the Republicans and they have the magic to appeal to the  Republicans's sense of patriotism, when they have openly displayed partisanship in impeachment proceedings in the House?

Widget is loading comments...
​
NEWS AND FEATURES
News & Features Around The World