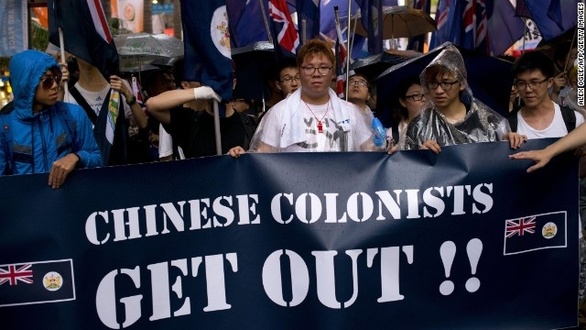 Hong Kong's pro-democracy protesters on Friday called off the talk they had started with government, following attack on them  by people opposed to occupation of streets.
Protesters suspended talk with government representatives and blamed police for failure to shield them from unwarranted attack.
Reports from Hong Kond said that the police could not contain the opposing camps. Police are reported to have been overpowered by riotious crowd who are against students who are occupiers.
Police manageably arrested two offenders and went away with dozens of occupants' opponents. A large number of people were consequently injured in the melee between occupants and their attackers in a protest that had been peaceful from Sunday when it began, and until Friday when opposition emerged.

Al-Maliki
Iraq's Prime Minister Nouri Al-Maliki has stepped down from pursuing another term in office, part of solution to Iraq's chronic political problem.
"I announce before you today, to facilitate the political process and to form a new government, that withdraw my candidacy in favor of the brother Dr. Harder al-Abadi, and all that go with that in order to preserve the high interest of the country," he said in a New York Times' report.
World leaders had urged the embattled prime minister to allow reason prevail, following reports that Maliki had said he would use his own soldiers against any arrangement that would change the status-quo, and later changed his mind to rely on the court of law than use soldiers.

Obama
Invading militants have captured Monsul, Tikrit and Fallujah.  They are heading toward Baghdad. It is the story of a country being overrun by terrorists.
Some news reports say that population in seized cities are claiming to prefer the militants to their own government.
President Barack Obama is considering what assistance the United States could offer Iraq outside putting boot on the ground; Hillary Clinton advises against rushing into decision and  Republican leaders are blaming the US government's earlier pull out from Iraq and indecisiveness over Syria. 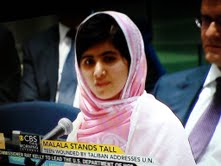 Malala Yousafzai
Malala Yousafzai, victim of Taliban's attack for campaigning in favor of girls education in Pakistan, yesterday continued her campaign at the United Nations,  New York. It was her 16th birthday. She gave a rousing speech that touched on universal call for girls education.
"One pen, one girl, one teacher and one book can change the world," she said. She added that rather than the attempt on her life to silent her, it has given her and others like her, bravery and courage.
"The Taliban would be mad with anger seeing a girl they wanted dead emerged on the world scene and carrying her campaign beyond their dystopian world," a young girl said on a Manhattan Street.
Malala 's story will remind readers of Clarisse McClellan in "Fahrenheit 451" by Ray Bradbury and the fate of people who ask too many questions, some student observers say and thanking God for Malala's survival.

The Free Syria Army has said it may  not attend the    peace talk scheduled to hold in Geneva, unless it has  enough armament    to bolster its position against Bashar al- Assad's  army.
The  leader  of  the freedom fighters admits what he references as  Assad's  fortified   position against his army, because of Russia and  Iran's  support to   Assad that marginalizes the freedom fighters  efforts.

A curious political observer has linked General Pervez Musharaf's entry into Pakistan on Palm Sunday as symbolic, because he sees people holding palm leaves.
But what has Palm Sunday got to do with political events in Pakistan, someone asked. You can never trust these politicians, he may have decided to arrive mimicking Jesus Christ's entry into Jerusalem as a king. (Read More) 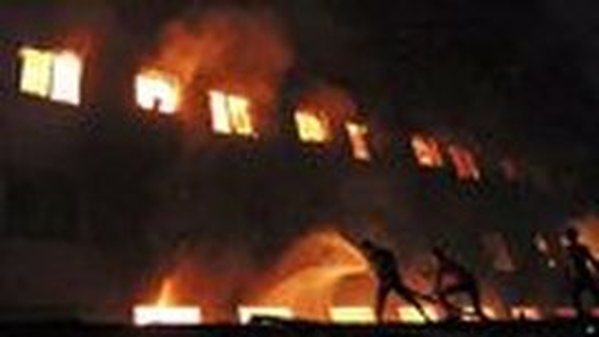 Courtesy: BBC.com
A major fire incidence at a clothing factory in Ashulia in Bangladesh has claimed more than 100 lives, reports from Dharka, the country's capital said. Some of the fire victims reportedly died in attempts to escape from the inferno.
The factory affected by the fire is described as having no exit, and has ran foul of regulations. But the owner said it is the first time one of his seven factories has been gutted by fire. The BBC reported that the fire began on the ground floor and spread to the ninth floor, making trapped workers jumped to their death.
It isn't the first time a factory has caught fire and kill workers, in an area said to have a concentration of clothing factories. But that fire incidence is constant here like as Nothern stars, because most of the factories run foul of safety regulations.
Search For Relatives
Hundred of relatives have besieged the premises of the factory to know if their relative are alive. One can only imagine men and women, whose husbands and wives have gone to work for livelihood, but won't return alive; parents and children, who would no longer see their children and parents return from work. 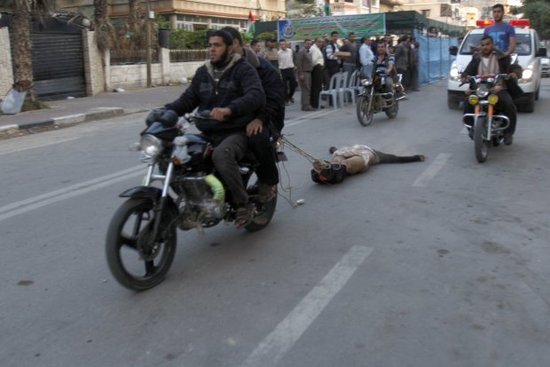 Fear of a wider conflict between Israel and Hamas has gripped the world, following their resumption of rocket attacks and bombing, death of over 20 people and damages. Rocket attacks and bombing reportedly continued between Israel and Gaza from yesterday and this morning, eliciting calls for de-escalation of the conflict to avert a regional conflagration.
Egypt's president, Mohammed Morsi has condemned what he called Israel's attack on Gaza as a disaster during a visit to the territory. Observers say Morsi's support for Hamas stems from his fellowship with Hamas in Islamic Brotherhood.
Former British Prime Minister,Tony Blair, called for restraint on both sides in the conflict, and urged Hamas to stop firing rockets into Israel villages and cities. He said if Hamas continues firing rockets against Israel, the Israel government will defend itself and there will continue to be casualties. He said that Hamas had fired more than 200 rockets into Israel, and said it will be in the interest of the region for
de-escalation of the conflict. He  made a passionate appeal to both sides against escalation of the conflict in the interest of the entire  region.
The US has added its voice calling for de-escalation of the attacks and asking Turkey to dialogue with Iran.  When Egypt's PM Hisham
Quandil visited the region, Israel said it would curtail offensive if Hamas ceases firing rockets into its cities and villages.
A source in Gaza connected to Palestinians said Israel started the assault, but Benjamin Netanyahu in a statement said Hamas caused the trouble, making life intolerable for millions of Israelis by shooting rockets into Israel's cities and villages.

The Fire in Syria
By Abiodun Giwa 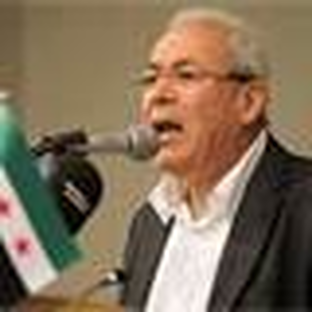 George Sabra(Courtesy:galeriuldagsoluk.com)
Syrian rebels are forging a coalition that will convince western powers of needed help toward unseating Bashir Al-Assad with selection of a Christian, George Sabra, as leader.The firestorm in the war has formerly taken a new turn with the rebels headquarter formerly in Turkey moved to a liberated area of Syria, BBC reports. The leader of the rebels, al-asaad is equally operating from the new headquarters in Syria. The war promises to be hotter than as it has in the past, with the rebels stationed within Syria and fighting for the control of the entire country, and not just a liberated area.

Soon after the rebel's headquarters moved into Syria, a major army barracks where Syria's army generals had their offices in front of Bashir al-Assad'a palace was bombed. The rebels claimed responsibility for the attack described by observers as a blow to the Syrian government. But reports said further that not much progress had been made by either side in the war after the bombing.

The war in Syria started couple of months ago when protesters against the country's policies were crushed. The war had already claimed over 30,000 lives.

The Syrian rebels are recruiting defectors to join in the of fight against government forces without a cohesive external support. Efforts by the United Nations' security council to pass a vote for a cohesive support for the rebels have been vetoed thrice by Russia and China that say  they are against using the UN supporting one side in a war against another.

The failure of the efforts to get the UN's security council behind the rebels has made a country like the U.S. giving uncoordinated support to the rebels behind the scene. And recently at the U.N. General Assembly in New York, President Barack Obama made it clear in a speech that he would like to see Bashir al-Assad out of office, and the the U.S. will be ready for the consequences for failure to achieve the objective.

At the same time the Syrian Minister for Foreign Affairs on behalf of his country said that it was wrong for anyone to support the rebels
against the Syrian government. But he didn't say anything about confirmed reports that Iran aids Syria in the country's war against the rebels.


The Syrian rebels may be far away from the type of coordinated support given to the Libyan rebels by western powers , because of reports that Al-Quada is physically present in the war in that country. 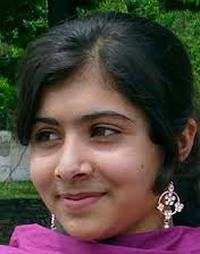 The tempo of prayers for Malala Yousafzai, the heroine shot and mortally injured by the Taliban for promoting girls education, had increased after she was airlifted to England.  She is currently receiving treatment at Queen Elizabeth Hospital, Birmingham, reports said.
Many who heard the news of her departure from Pakistan were happy for her and her family, and prayed for those who organized her airlifting for medical needs in England.
It later became public that the Pakistani government flew her out, at the instance of the United Arabs Emirate's government.
Observers view her departure from Pakistan as an escape from the Taliban that had threatened to kill her if she should survive.
Before shewas airlifted, report had said she was in severe condition, a report that raised concern about her survival.
Observers are praying for her to survive because the world (especially the Moslem world) needs courageous people like her, to impress the truth on those who are blinded by the evil of religion ideology.