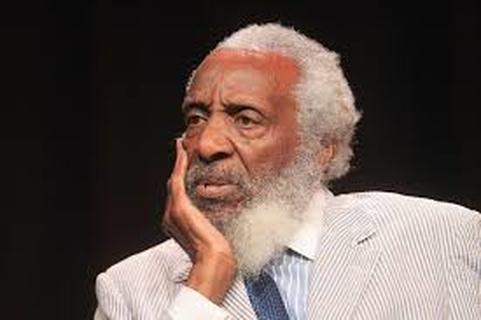 Dick Gregory
Humans want and need a perfect world. But what they have is something opposite of perfection. At the beginning, the creator gave a perfect place, a man and a woman in the garden. Then something unexpected happened that changed the course of human events.
Perfection gave way to imperfection, and things have never been the same. Abel was killed by Cain, his own brother, without any remorse.
Adam told his benefactor that the woman he gave to be with him made him to disobey heavenly command, meant to be obeyed!
When information about the death of Dick Gregory came in the news on Saturday, it was a quick reminder about his own efforts to correct the anomalies in the human society that is not perfect, which he believes ought to be better in term of organizations and attendance to human needs, without respect for persons or color, but service to and respect for humanity.
And based on what he wrote in his book, "The Shadow That Scares Me", an interesting writing on the state of human interactions in the United States of sometime long ago, and events in Charlestons few days before his own departure to a better place, the reality is that the shadow he writes about in his book is still here scaring the hell out of us and almost being unnecessarily exacerbated.
Gregory writes in his book about the need for us to out brothers' helpers! Yes, one of the reasons he feels that there is a shadow that scares us around us, is because we don't love our brothers enough, to think it is desirable for us to help them. It is an indictment on the an entire human society that seems to have lost touch with humanity.
He writes about the way the society views the police as problem solver, a problem he writes that police have not created. He see the function of the police as more gruesome and dangerous than of soldiers, because according to him, soldiers know their enemies in combat, in comparison to the police that has to search for the unmarked felons among the entire populace.
Gregory's seminar work affected me. Reading the book sometime in 1981 or thereabout led to writing my second published article for a magazine in Nigeria at the time. After I read "The Shadow That Scares Me", I looked around my own society, which at that time was Nigeria, where I saw events and a shadow that were almost of the same picture like the one one painted by Gregory.
I decided to put my experience in writing. It was titled "How To Be Our Brothers' Keepers" and it was by the "Times Magazine", on the Daily Times' stable.
Of course, the Nigerian society is worse in term of the neglect of the ordinary people compared to the U.S., where poor people have access to social networks capable of lifting them out of poverty, without respect of persons, color or status. The arrangement in the U.S. The event in Charleston about the right wing protest and the death of a lady and the ensuing protest about destroying monuments cannot be a way to take care of our brothers, but a way to confusion.
Let us remember that confusion does not provide breads for needy nor homes for the homeless. If there is anything unbecoming in the current arrangement against the perfection we seek, let us do what Gregory did. Put our grievances in writing to spur government into action.
The written word travels a long distances than anyone can imagine. I came across Gregory's "The Shadow That Scares Me" in my eldest brothers's library, which I used as my room at the time. The book itself was signed by Dipo Fadiora, from whom my brother may likely had got the book. The book educated me about the race relations in the U.S. and how to ensure the danger is curtailed, and not exacerbated.
Of course the government must not listen. But destroying monument is not the solution. The solution is making provision for the needs of everyone to the satisfaction of all towards the Utopian goal.
NEWS AND FEATURES
News & Features Around The World