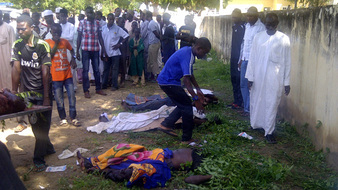 A grisly photo from the scene (Courtesy: Foxnews.com)
67 students in an Agriculture college in Damaturu, Yobe State of Nigeria, were murdered in their sleep by people suspected as members of the dreadful Boko Haram early on Sunday. The BBC and the AFP gave a grisly early account of the terror killings in one of the two states the government in the country had declared a state of emergency toward arresting Boko Haram murderous activities.
The  killings in Nigeria today is a reminder of Kenya Kenya terror attack where 61 people, and 6 security personnel lost their lives and on a Sunday too.
The victims of the Nigerian killing went to bed last night unaware they would not wake up again or that it would be their last sleep in the dormitory. Some of them may have called their parents or friends yesterday, and the parents this morning could be uncertain whether their sons were among those who had been sent to untimely and painful death.
What is life becoming for Nigerians? What had the students done to merit such death? And what about their parents who are home and believing that their children are save in school?
This is the face of terror, real terror that invokes the problem that leaders in terror prone countries face. How are they going to explain to the people that the security could not protect the people?
A response from a Nigerian woman, whom the husband called and intimated about the killings in Yobe, asked whether there was no security in the school. She said that they did not hear any news, and that if the husband had not called and told her, she would not have known about it.
Of course, the investigation will begin with questions about the security in the school and the country as a whole. Is it possible to provide the type of security required to forestall terror attack in a particular school, where every school needs to be protected?
The questions will be directed at the government, and the president of the country will be answerable to attacks that are being executed by the terrorists, because he is the commander - in - chief who also have promised to keep the country safe. His political opponents and enemies will tear into him and call him incompetent. Some will say he has brought a curse to the country that it is his time that evil are befalling the people. Only reasonable will see correctly that mere security apparatus meant for domestic protection cannot be sufficient to tackle terror that is moral equivalent of war.
A terror stricken country will make those who know recall Oedipus Rex. Oedipus became the leader of his people because he solved a major problem that was beyond his contemporaries. Yet, soon after he settled in power, another hydra-headed problem emerged and the elders called  called on him to show leadership. Those who remembered he had helped the people before he became a leader still expected him to prove his worthy. It was such circumstance that propelled President Goodluck Jonathan's declaration of state of emergency in Borno and Yobe States, and what became a declaration of war against the terrorists.
Obviously, it is manifest that the Nigerian security apparatus is incapable of routing out the terrorists unlike what the world saw France did in Mali that made Francois Hollande a hero in that country. France rose up and helped Mail, because France was Mali's colonial master, and at a time of need, Mali saw a friend in France.
Today, a major question will be what is Britain doing that it cannot do in Nigeria, France's Mali yeoman act, showing love of humanity and the need to save a land it once called its own?
Does Jonathan need to come begging for help before Nigeria will be helped?