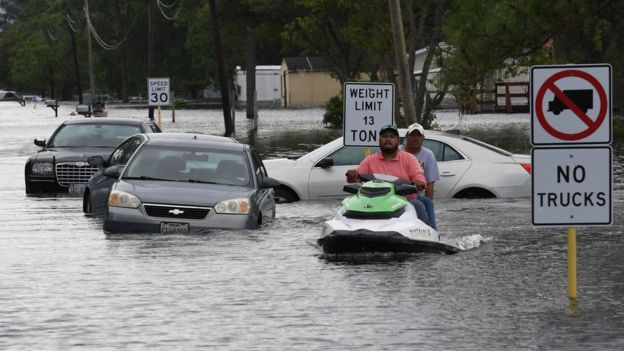 More people have been reported dead in the Hurricane Harvey's mayhem in Texas. The number of the dead has risen beyond 30 and closing to 40.
Now, reports are all over town about rescuers who drowned; about a police officer who drowned in his car.
About how a pregnant woman in labor was helped by rescuers and the story about how long it will take the water to recede, and how another news said that water has started to recede.
Hurricane Harvey has created a source of all times for news hounds. It is a perfect scenario about how no good news is news. Harvey isn't a good news and it fits the scenario.It is not a good news for people to face the risk of drowning. It is also no good news for people to seek to safe others, while risking to lose their own lives. There is no incidence currently in the United States that can equal the Texas' experience in term of news worthiness.
Hurricane Harvey's deluge in the Texas' as an episode is a reminder of the scriptural Noah's flood and the receding waters. However, the Texas' experience in not a perfect comparison to Noah's flood, the loss of those who refused to evacuation and the saving of just few, who obeyed the command to step into the ark, built by Noah, as he was commanded to do.
When two rescuers death is added to the drowned police, it pushes the number of casualties upward. But it is not the number of the dead in Texas that has made a big story. It is the efforts by rescuers and the thousands they saved from the jaw of death. There is nothing more than that of anyone giving his or her own life for others to live.
It is what has made the Christ's ministry on earth different from any other, for willingly giving his own life, when he had the power to save his own life. we are here talking about rescuers who went into the danger of saving others, and not politicians coming into the glare for future political gains. People that are rarely known and altruistically went into the flood waters carelessly about the danger to their own lives.
They may never be known, but a thought and a salutation to their bravery and courage and selflessness will be a source of encouragement to other to learn to selfless and be bold to give to others. In the next few days, more stories about courage and bravery in Texas will come to light, as stocks will also be taken about the loses and steps toward the future.
Governor Gregg Abbot said the worst is not over. But with world's attention on Texas amid prayers and rescuers ready to give all, Hurricane Harvey has lost the battle. The displaced are having open arms and the news about Joel Osteen's readiness to give accommodation to those in need is inspiring.
Corporate bodies like the Facebook are also asking public spirited individuals to chip in whatever they can muster. Abbot said that the Federal might is with the Texans, just as all people all over the world are praying silently for a happy ending.
NEWS AND FEATURES
News & Features Around The World