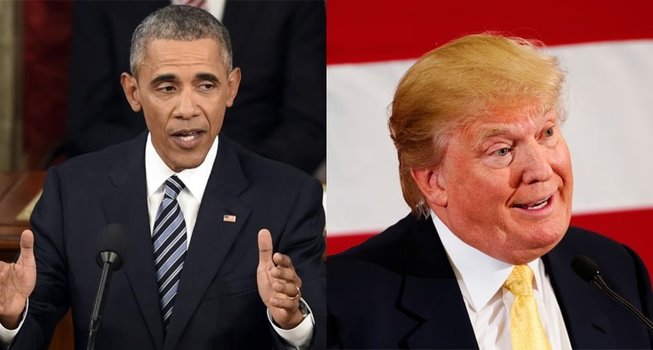 Former President Barack Obama and President Donald Trump (Courtesy: RawStory)
Everyday, we hear about unresolved Russian interference in the presidential election. Is the claim about Russian interference in the election true or false?
No one has said anything to confirm anything, about the song of Russian interference in the Presidential election, other than that the Russians reportedly hacked the computers of the Democratic Party.
And the Democratic party has since not stopped its swan song about Russian interference, following the loss of its candidate in the election. The party does not seem to consider that its candidate in the election won about three million votes more than the Republican Party, mostly in the states like New York California.
How long it will take the Democratic Party to accept that it is the the technicality of the Constitution that has given the victory to Donald Trump, is beyond comprehension. What interference would they say is responsible for the three million votes to Clinton over Trump? Is it the same Russian interference?
The way the Democratic Party has gone after the Trump's administration over the Russian hacking of its computers is like the party has answers to show that it has Trump sitting with Putin in the hacking business. it is this madness that may have led to dragging President barack Obama into the fray, to explain how applications were toward surveillance of Trump's Tower, reliably twice.
The first application said to have been made in July 2016 was rejected and another was made in October. Was the surveillance eventually done or not? Men in the Obama administration said nothing of sort happened. Republican Party apologists are saying how can they be sure and they are asking for investigations into the wire tapping allegation made by Trump against Obama. It has become tit for tat and that what is good for the goose should also be good for the gander.
The Democrats started the power tussle for their lack of spirit of sportsmanship. Why should a case of hacking of your computers suddenly turn meetings by members of the Republican Party into crime and some Democrats also met the same ambassador without any repercussion? Is it because those Democrats are not seeking positions in government?
​    Many people are now asking for thorough investigation into all that have happened from the allegation of wire tapping to the Russian interference, to allow sleeping dog lie. Of course, there side talks about how NSA once said to have harvested  ordinary American' phone conversations and to why Edward Snowden was hounded from here to Russia.