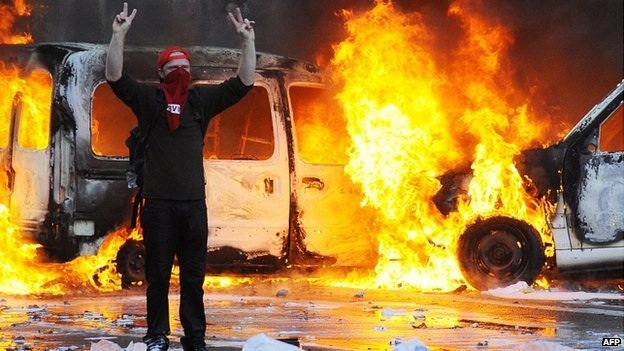 Vehicles on fire on a Brussels street Courtesy: bbc )
Belgium workers are protesting government's decision to freeze wages, raise pension age and make public service cuts to align with EU requests. The striking workers comprise steel workers, teachers and dock workers.
About 100000 workers, comprising teachers, steel workers and dock workers, went on a peaceful protest demonstration in Central Brussels that later become violent,, and the police responded to using tear gas and water cannon.
Workers described government's plans against workers as a blow to workers and the unemployed and reportedly set vehicles on fire; threw flares and stones at law enforcement agents. 50 people sustained injuries and police arrested 30 people.
The protest is said to be the beginning of one month of strikes organized by the trade union, to be climaxed with a national strike on December 15.
Like it has been witnessed in Ireland, where government has justified imposition of water rate due to economic reasons, the government in Brussels under Prime Minister Charles Michel has said the austerity measures the workers are protesting are imperative to check budget deficit.
Government's position has been countered by representatives of the workers union that they understand the government needs the money puts at about $11 billion, but that the unions have been been consistent in telling the government to seek the money elsewhere and not from workers's pockets.
NEWS AND FEATURES
News & Features Around The World