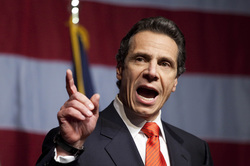 Governor Cuomo
Michael Bloomberg's tirade against Bill de Blasio, front-runner in New York's Mayoral race has back-fired, as Governor Andrew Cuomo wades in defense of de Blasio and the family value. The governor in a news report describes Bloomberg's remarks earlier published in several newspapers as inappropriate and that every one has right to be proud of the family.
Observers have described Bloomberg's remarks  as an attempt at scuttle de Blasio in the mayoral race. But with a robust defense of the family and that everyone should be proud of his of her family like Blasio does of his, the family value, which has been of great help to Blasio's rise in the polls has received a boost.
All day on Sunday, the debate among New Yorkers is what Bloomberg may have meant by describing Blasio's campaign with family as racist? They ask whether it is out of place for a man to have his wife and children campaigning with him? And conclude that if a candidate's wife or husband and children don't campaign with him or her, who would be ready to join a candidate in campaign?
The answer to these questions emerged in Cuomo's powerful words late on Sunday. And people believe it will resonate in the fierce mayoral race campaign two days away from election.
Just as Cuomo has waded in defense of Blasio's robust campaign, all other contenders in the mayoral race fall in line, each describing Bloomberg's remark against family value as inappropriate and uncalled for. Some observers view Cuomo's defense of the value as indirectly endorsing Blasio. But others disagree, and say that Cuomo has done what a whole lot of people itch to do, but have no avenue of reaching a large audience.
Earlier de Blasio's wife and her two children from have ripped Bloomberg's statement and almost short of calling on the mayor to apologize for his shortcoming.
Blasio has been campaigning with wife and two children, showing a multi-racial family. Many people see the family campaign as the best that has happened in this mayoral race and for a billionaire who does not seem to understand the important of family value in politics to say something that is capable of killing the candidate's momentum is seen as highly undesirable.
Comment Box is loading comments...
NEWS AND FEATURES
News & Features Around The World