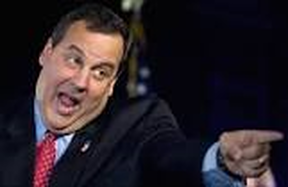 What Governor Chris Christie wanted to avoid for rushing back home before the snowstorm from  campaigning in the battleground states he had got into for rushing back to campaigning after the snowstorm. Questions had been asked by observers before Christie rushed back home whether the governor would be returning home to take charge of work against the snowstorm.
When eventually Christie returned home, he satisfied observers' expectation of being responsive.
But with the flood reported in Woodland in New Jersey, the governor's hurried return to the battleground states for not having waited behind in his state to tidy up the flood in one area of Jersey Shore is haunting with a question thrown at him by a female spectator in one of his campaign venues. Christie answered the woman's question quite all right by saying that it was not all areas of New Jersey that was under the flood but just only one county out of the 21 counties. But adding that was he expected to go down on the mop was over the top.
Christie knows his state. He knew why he rushed home from campaigning before the storm. Couldn't he have known that the Woodland area was vulnerable to flooding given the Sandy storm experience and took steps to help the area through his office? Could he have rushed back and leave New Jersey leaving residents without anywhere to go for help in his absence?
Pictures show the Woodland as in flood, residents crying about possible loss of their homes and one of them says on camera that the problem of the flood is beyond mopping, a reference to Christie's response. But as the news reports continued on the issue, Senator  Cory Booker came on the scene and said that everything needed to help the flooded area was in place with the governor's office in the picture. He also said that it was an issue that should not be politicized. Happily, Booker is a Democratic party senator while Christie belongs to the Republican party and observers cannot here say that Booker is helping tp politically protect the governor.
NEWS AND FEATURES
News & Features Around The World