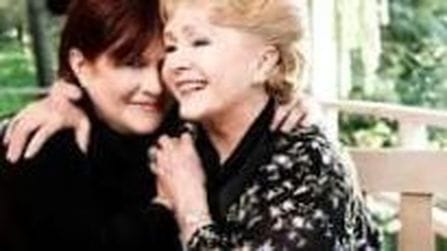 Carrie Fisher and Debbie Reynolds
"If music be the food of love, play on," are Shakespeare's way of describing the relationship between music and and love. Without music, love will be famished, because music represents for love, what food is for in humans' sustenance.
​       No death news is a beautiful story. Yet, when celebrities die, they make news and it is the type of story no news reporter will ever throw away for anything.
When Michael jackson died, he made news, because himself was already news as a musical star. When George Michael died last week, he made news not because he was Michael, but because he had had touched souls with his music as an entertainer. The same happened with the death of Marvin Gaye.
When music stars die as entertainers, they hardly go unnoticed. Thus, when Carrie Fisher, an entertainer of no mean feat, reportedly had heart attack in the aircraft traveling from London to Los Angeles about a week ago, it was a big news and it was not certain she wanted it that way, because whether an entertainer or not, a heart attack in the air is news.
​    The question was whether she could survive the attack. But the earliest information that trickled down from the hospital that it was a bad case was not good, another good news for the newshounds.  But that did not  matter, people prayed for Fisher, just like they prayed for Jackson. Not many people would have have forgotten the outpouring of prayers for Jackson's survival.
Many  people  expected Fisher to survive, just like many people had expected Jackson too to survive, but the oppsite became the their case. Jackson died and Fisher too died. Fisher died few days ago. Sadly, Fisher's mother,  Debbie Reynolds, another entertainer of no mean feat, could not behold her daughter's death and she too succumbed to 2016 death list. Imagine a family, one family, having to deal with two deaths, mother and daughter, within 24 hours.
It is the type of pain that the year 2016 is leaving behind to the world as a family and to those who have lost their loved ones among the titans who have gone with the year 2016. The latest statement from the families of Fisher and Reynolds is that the family is planning a memorial, but no one is sure yet, whether it will be a joint memorial for mother and daughter, which family sources say will be ideal, but the family is doubtlessly planning a memorial.
The relationship between entertainers and the public is one of love sustained by the public's love for the entertainers works as food. And no one can deny the pain that comes from the loss of food either as edible or otherwise. Real love is known to be strong, especially the type between mother and her children and the type exhibited by Debbie for Carrie, unable to continue here, without her.
Some people are saying that Reynolds died of broken heart. What did they expect from a great love affair between mother and daughter, who were so close and shared everything in common? If her death was a result of broken heart as people had said, it was more of a broken heart for the love of a daughter.
Daughter died on Tuesday and the mother followed on Wednesday. And the show ends, just as 2016 crawls to an end, giving way to a brand new years. As it is said that loves overcomes everything, no one is discussing the cause of Carrie's heart attack in the air, at least for the benefit of humanity if not of others alive.
Possibly, she had a glimpse of heaven as presented in the scriptures and one that she could not reject the choice, than remaining in a damaged world. At least, believers are taught that Jesus Christ died for the world to live, and that whosoever believes and follows his path will not die, but have everlasting life.
NEWS AND FEATURES
News & Features Around The World