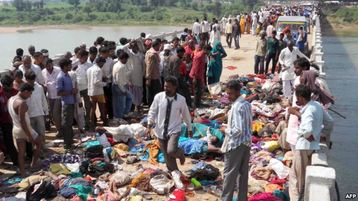 The bridge in India strewn with casualties (Courtesy:voanews.com)
About 115 people have been reported dead following a stampede on a bridge near an Indian Temple, in Madhya Pradhesh state, Sunday morning, according to an AFP report, published by Kenya Daily Nation.
Another official said on Sunday that many of the victims were women and children and that the incidence happened during a Hindu festival. The source added that the trouble may have followed a panic, based on unconfirmed information that the bridge  wanted to break apart. Other likely causes have been attributed to the panic that resulted to the stampede.
According to the a BBC information, a mass of people had assembled close to Datia township for the ceremony. Attul Chaudhary, a devotee who spoke to the media gave an estimate of about a thousand people on the bridge.
There were cries and people rushed frantically in attempt to get out. Chaudhary said many people were seen lying lifeless on the ground during the effort by others to escape. Some were said to have jumped into the river. Those who were near the exit of the bridge were fortunate as they sped for their lives, unlike those caught in the middle of the bridge.
This is said to be the second of such stampede on the narrow bridge, rebuilt in 2007 after the first stampede. India is said not to be strange to such stampedes during festivals resulting in deaths.
HTML Comment Box is loading comments...
NEWS AND FEATURES
News & Features Around The World