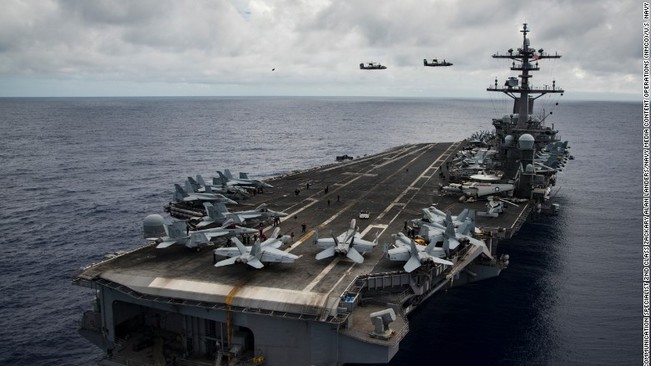 No one is certain, whether the trouble between North Korea and the United States, will lead to war.
But observers are saying the world is already hearing what seems like drums of war. And that there is possibility of a war in the making.
They ask how are we to view the latest tango between the U.S. and North Korea?
​    North Korea has been testing ballistic missiles as if it food for its people and the leaders are actually proud about these tests and the drilling of military and armored personnel, which observers say have become a threat to the world and especially the U.S.?
North Korea has essentially shown that its ballistic missiles tests and acquisition of missiles are targeted against the U.S. mainland. And as the debate is continuing on the U.S. show of power in the Korean Peninsula as a way to make North Korea become wise, the country issues a threat to sink the U.S. war ship in the Korean Peninsula.
Some observers are saying that the U.S. has no intention to engage the North Korea in any war and the the North Korea is merely provoking the U.S, and the the U.S. will resolve the matter without a war. Amid the developments, buses pulled up at the senate building of the U.S. Congress and the senators bused to the White House for briefing on North Korea.
There was suspense in the air with the invitation to the 100 senators to come to the White House for intel briefing over North Korea. Government sources, including the reliable sections of the media still said that it was all hues, but that all the developments over North Korea, from the North Korean side as well as from the American side, will not lead to war. But over the weekend, President Trump said that the possibility of war with North Korea cannot be ruled out.
North Korea has not stopped testing ballistic missiles, with Jong-un watching with admiration. Many people are asking about what Jong-un stands to gain from all these ballistic missiles' testings and the admiration that he is showing? Compared to the time that he assumed office, he looks more like pumped or inflated balloon these days. He seems to be dragging his feet on the ground, like he is finding it difficult to walk.
Someone had said in a discussion with this reporter that Jong-un seems like a robot and that all the pictures being shown on the television about the weapons of war look more like robots and not real. Jong-un hair style also shows him as someone not really to be trusted as a responsible fellow.
It is therefore being said that the guy may go as far a fulfilling his boastful words of sinking the U.S . war ship. And if he does, would not there be trouble for North Korea? Would the U.S. fold its hands, watch its war ship sunk by Jong-un and not respond adequately? Jong-un surely cannot rely on Trump's words on his readiness to meet jog-un, unless Jong-un changes his style of leadership.
If Jong-un fails to be civilized, he is certain to bring trouble upon himself and his country. Leaders who love their country and the people to dont look for trouble and fight they know they cannot win.
NEWS AND FEATURES
News & Features Around The World