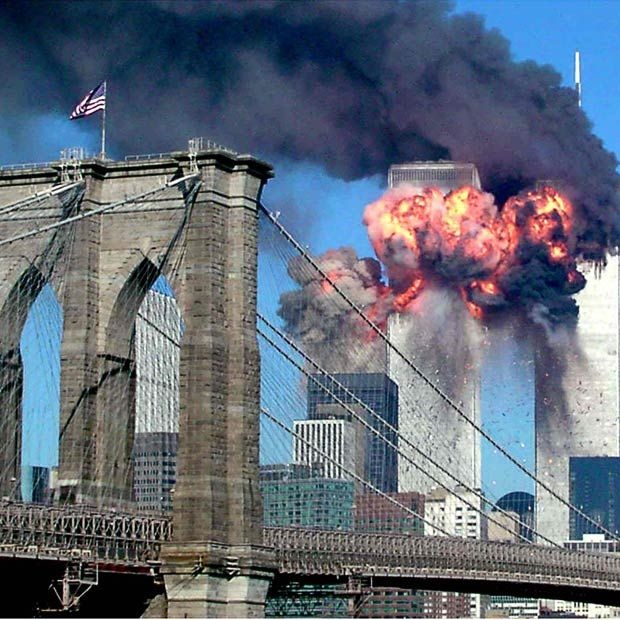 The World Trade Center in New York on September 11, 2001.
"Abija" as a Yoruba play explains itself about perpetual fighting and one that always begins with a song.
"Enmity at home, enmity abroad and enmity in all over the places. When would wars end and enmity become a matter of history?"
The play teaches viewers the danger of enmity and warring and continuous warfare.
The last time the play was aired in Nigeria was before September 11, 2001 attack. There had not been an attack on the World Trade Center in New York City by  diehard terrorists, who are ready to die and are looking for people to take with them, when the play was serialized on the Nigeria Television Authority.
It was not that there was no enmity yet at the time. There were enmities, because there had always been enmities, between nations, between individuals and between groups. And it was possible at the time that the background to the eventual attack on the United States, the reprisal against Saddam Hussein's Iraq, the Middle East imbroglios and others around the world already had their foundation. If there was no enmity, the play would not exist to teach the need to avoid wars and bloodletting.
What we have been witnessing in tern of attacks here and there may well represent manifestations of disagreements that have not been resolved. Without disagreements and enmity, there cannot be attacks. It is not that enmity is a strange phenomenon. People do become enemies, but that it is always right to resolve issues than to embark on senseless attacks or at best to stay away from one another, without attacking one another and to live in peace as neighbors..
No one seems to have taken time to explain to the public issues that has led to the bloodletting being witnessed by this generation, with humans on the attack against one another like animals. In Beowulf, we know of an animal ( Grendel) and its mother and their siege on a human society. Helped came for the community and the animal and its mother were eliminated. The killer of the animals became a king in his land, but later to be confronted by another animal that kept watch over a trove of wealth owned by people who had died and their children and grandchildren also had died. The king killed the animal in their encounter, but the king also did not survive the encounter. The story progressed to stages that human societies were seen waging one against one another and vengeance became the order of the day. The story teaches the danger of endless warfare and vengeance and their impact to decimate humans and retard progress..
Currently, the human society seems to be facing the same problem exposed in Beowulf about endless warfare and vengeance. There is a war in Syria. We all know the cause of the war. There was a war in Iraq. We all know the cause of the war. There was a war in Libya and we all knew the cause. We all knew how Saddam Hussein and Mummar Gaddafi's lives ended. We all knew the cause of Iraq's war and the mistake about the war. Although, foreign forces have since left Iraq, but the war in Iraq has not ended, because of the differences among the people there and the vengeance that has become an order there. Some animals attacked the World Trade Center and killed about 4000 innocent people and the move for vengeance against Iraq was wrong headed .
Osama Bin Laden had been killed, but his members in Al-Queda are still all over planning evil to avenge his killing. Another monstrous organization, called the Islamic State, much more dangerous than Al-Queda, has taken over the role of Al-Queda. The civilized society said it would not dialogue with terrorists, but nonetheless, it indirectly provided arms for the animals in the Islamic State to fight against Bashir al-Assad  of Syria. Part of the arms given to the Islamic State has buoyed the Islamic State and helped armed it to the teeth, and  it has turned the same arms against the civilized world.
Just few days ago, the news showed how a convoy of the Islamic State was ambushed by war planes of the civilized world and scores of Islamic State members, numbered about 200, lost their lives. The event of the ambush of the Islamic State convoy was a reminder of how the convoy of Gaddafi was intercepted from the air the day he was killed. And just on on Sunday morning on the third day of July, 2016, the news emerged that a bomb explosion by a suicide bomber had killed about 78 people. Before the end of the day, the number of the dead had climbed to about 200.
Is the 200 Iraq people killed after the civilized world killed 200 members of the Islamic State not a revenge for the bombing of the Islamic State and the killing of about 200 of its members? This is as if the number of people killed in Paris, Brussels, San Bernardino, Orlando, Boston, Bangladesh, Turkey and a host of other places like Nigeria and Kenya have not been enough. When will the bloodletting end.
Now, we are told that the animals could strike again in our neighborhood. We live in fears with enmity all over amid endless warfare.
NEWS AND FEATURES
News & Features Around The World