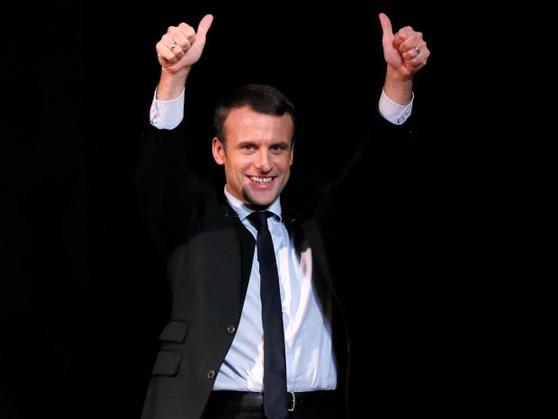 France President-Elect Emmanuel Macron
Emmanuel Macron, 39,  won the presidential election on Sunday. French Polling Agencies projected him to have won with about 65% of the votes and the remaining went to Marine Le Pen, Macron's only opponent in the final lap of the election.
Le Pen has conceded defeat and she said she has sent a congratulatory message to the winner on his victory.
With Macron's victory, France will remain in the European Union and France has avoided the earthquake change, which would have greeted the country's departure from the E.U, had Le Pen won.
In his acceptance speech, Macron has vowed to fight with all his strength against division in the country. Aside from his declaration that France will remain in the E.U,, he said that France will cooperate with all international organizations that she has obligation.
Macron is said to face challenges with the tide of terrorism and high unemployment in France. In realization of this, Macron promises to get the country going again. He is not expected to make such changes such as breaking with the past, but he is nonetheless expected to restore hope for the mass of unemployed youths, who seem to have lost believe in the system. Therefore, macron's may goal will be giving France a desirable future.
As a former economic minister for two years, before he resigned and put together a plan for presidential run about a year ago, reliably due to difficulties to effect changes from within, he is expected to move strongly against unemployment and restore hope on economic issues. But meanwhile, Macron is on his way to Louvre, where he will address his supporters amid celebration for a hard won election and the youngest president in France since Napoleon Bonarparte.
President Trump has tweeted a congratulatory message to Macron. Of course, the E.U. saved from another political scapel and loss of a vital member country, has sent a congratulatory message to the new French leader.
Comment Box is loading comments...
NEWS AND FEATURES
News & Features Around The World