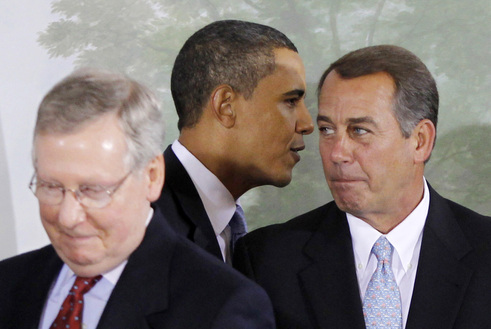 MCconnel, Obama and Boehner (reuters.com)
President Barack Obama and Speaker John Boehner of the United States are at it again, over spending bills and debt limit. The House of Representatives has passed a spending bill that targets defunding Obamacare and the president says it is anathema. Pundits say the bill will go to the senate where it will be stripped of the part to defund Obamacare and be back to the House, and the news says there will be a showdown between the White House and the House of Representatives. President Obama is not willing to negotiate Obamacare, and the House says Obamacare is too expensive.
Top politicians steering in show of power happens all over the world. It begins with elections and continues after elections, showcasing a tradition of no permanent friends or foes, but common interests. And where interests differ, there bound to be conflicts that cannot be avoided as it is happening between Obama and Boehner led House of Representatives; between Goodluck Jonathan and some of his brethren in the ruling party in Nigeria and as the world has witnessed between Robert Mugabe and Morgan Tsvangarai in Zimbabwe.
Is it surprising that President Barack Obama and the Republican Party members in the Congress hardly agree on issues? Political pundits say that the letters of the United States’ Constitution do not intend them to permanently agree as friends or totally disagree as foes, but to seek a common ground in between, for the good of the country. They say it is the nature of politics, and events around the world seem to be proving political pundits right.
Respondents to Global Pentorch interview cite the U.S. as a classical example where politicians in the two parties hardly agree; not as enemies but as peoples’ representatives, who seek to fulfill promises made to their constituencies toward ensuring reelection and protecting their own integrity, despite that at times the debate may become rancorous. In their disagreements, they always remember the letters of the Constitution and carpet crossing from one party is noticeably an anathema. People say it is one of the reasons that make the country’s democratic tradition exceptional, compared to others around the world. The sort of disagreement that the world say is unacceptable is a disagreement that will lead to a situation like the one in Syria, as recently witnessed in Egypt and Kenya in 2007.
In Kenya, the current president and the vice-president belonged to different parties during the acrimonious elections of 2007 that claimed over 1000 lives. Although they were foes prior to the last election in which they were voted into office, but they suddenly found a common interest that united them. Prior to the last election in Zimbabwe, Mugabe and Tsvangirai worked together after disagreeing over the issue of election results. Now, Mugabe and Tsvangirai are apart again. The last time that Mugabe spoke about the election he won in the country and Tsvangirai lost, he said Tsvangirai could go to hell. It does not mean there can no longer be reason for the two politicians to come and work together in the future.
People see events in Egypt as a strange development for the vanquishing of the president, his party and followers, without any attempt toward inclusiveness by the military backed hand picked leaders. People are saying that allowing the military to intervene in the political process is grave. But others said that the president, his party and his supporters caused the evil that was visited on them. Yet, the world agrees that military intervention in the political process is evil. If military rule is evil, democracy is rancorous, and one cannot quickly forget Socrate’s summation about politicians, prior to his arrest on allegations that he corrupts the youths.
Look at what is happening in the U.S. where President Obama and Speaker John Boehner can hardly sit down to discuss issues as it affects Americans. The one major time the two men sat together for the love of humanity was during the recent debate over whether or not the U.S should intervene militarily in Syria. It shocked observers that Boehner was quick to support Obama on Syria. Immediately after, the debate over the spending bill has torn them apart. Boehner’s House wants to control spending, defund Obamacare and if possible, kill it. And the president, always in the campaign mode, has continuously alert Americans to Boehner’s plans, which he says runs counter to protecting the interests of Americans. He was in Missouri when the House passed its own version of a spending bill toward defunding Obamacare, and the president countered from there. Some observers are accusing the Republicans of attempt to shut down the government and make life miserable for Americans. The brickbats will continue, a form of unwelcome entertainment, but which the electorate has learnt to accommodate, while waiting for their on role on election’s day.
The president knows what he wants and just as Boehner; as is usually the case, both will allow national interests to triumph over mundane political interests and not allow the ceiling to cave in. The case in Nigeria is more pathetic, compared to the U.S. In Nigeria, the president is calm, while his antagonists are having a field day. They have almost made the country ungovernable. Rebels within the ruling party are working to seize control of the national assembly from their party. The Rivers State governor, Rotimi Amaechi, is challenging the minister of finance to resign, and telling the country the reasons he says he is fighting the president. Yes, fighting the president! The president’s men are talking, but president is not saying anything and making his adversaries look like fools. But some Nigerians are saying they wish Jonathan can get into the campaign mode like Obama is doing in the U.S.