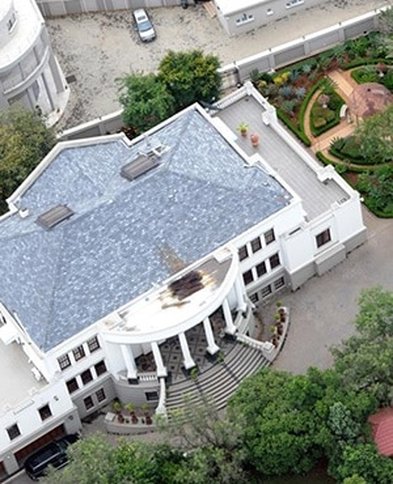 The Guptas family property in South Africa with the armoured military vehicle parked in front. Courtesy:News24)
On Palm Sunday, Christians all over the world remembered the entry of Jesus Christ into Jerusalem against entreaties for him not to do so, for the safety of his own life. But Christ had an important message he needed to deliver in Jerusalem.
​   And if losing his life will be the consequence of his daring, he was careless. Because he was a King, who was more than the worldly kings, who were gaining the world, but were losing their souls!
It is the one message that summed up Jesus Christ's message to the world about the love of material wealth than doing things that will ensure peace of mind here and after death.
What do you think Christ will teach Bashir Assad, if he is to be here now and Assad is clinging to power in a country, where destruction has become a way of life and the sky is almost falling over him? One question needing asking is whether Assad still sleeps. And if he does, how does he manage to enjoy closing his eyes under the circumstance that he is living? Trusting on Russians and Iranians for safety?
Also look at the piece of news from South Africa, where the Gupta family members live in fear, and have acquired an armoured military vehicle for escape, in case of emergency, because they can no longer trust the police for protection.
The Guptas are close allies of Jacobs Zuma, the embattled president of South Africa, who has been going through the mother of all oppositions, since he unilaterally executed the sacking of his finance minister. By sacking his finance minister against public entreaty, Zuma has gained the world, but it is difficult to say whether he can still sleep, because of a political situation equivalent of losing a soul, because a vote of no confidence is awaiting him in the parliament like the Sword of Damocles.
As it was in Christ days, it is still today. Men and women doing things, equivalent of gaining the world and losing their souls. It is a pivotal day in Churches across the world, for pastors who know how to write good sermons about doing the will of God and shunning the gain of the world to retain the soul. And you know why the Roman kings hated Christ's message. He was direct, without hiding the meaning of his message.
Kings do not want anyone to compete with them. It is birthright for them to be kings and they don't think anyone can claim to be a king, when not from their family lineage. And hearing about someone they don't seem to understand how he claims to be a child of God, and claiming to be more than the kings of this world is welcomed with shouts of 'Hosannah' and blessings to the one coming in the name of the Lord, is absurd to them. Christ added salt to their injury, when he overthrew money changers in the temple.
To gain the world, the life will depend on acquisition of so much material wealth and your life will depend on it. It is why poverty has been on increase around the world, because of the so called leaders, who take care of their businesses and the care of the people is secondary.
It is the era of celebrity culture, fornication, adultery, disrespect and bastardization of the institution of marriage and anything goes, as long as you are wealthy and can acquire properties.