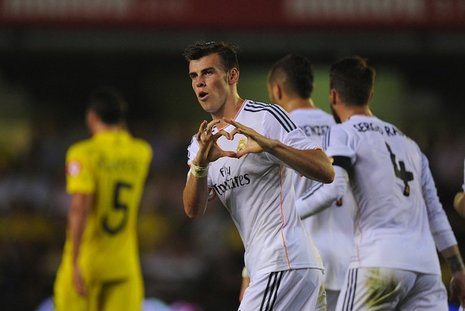 Gareth Bale displaying the heart celebration (Courtesy: BleacherReports.com)
Mid September weekend 2013 witnesses the soccer world debating Gareth Bale and his mouth-watering transfer to Real Madrid. At a gym walk-out session, one of the many television sets across the ceiling is showing Real Madrid Club officials in a news report, unveiling a player with whom all try to earn a handshake.
The player is indisputably the toast of the moment. In a pair of suit
and looking trimmed, he makes sure he shakes hand with each official as they all try to reach out with a handshake beaming with smile. The first inkling is that a player being unveiled by a club of Real Madrid’s level must have been nothing less than a star.
Real Madrid of Spain is a household name to soccer enthusiasts
and for a player to be honored by it makes such a player’s background something of interest. And the question arises about who is Gareth bale? It is unknown to the inquirer that Bale would be playing his first match wit Real Madrid the following Saturday. There was a report about Bale’s encounter with a new team-mate at a training session. The continuation of news reports about Bale and his first match creates what Public Relation and Marketing professionals will call ‘viral’. And that leads to people developing interest to want to know more about Bale.
Wikipedia reveals that Bale is a Welsh footballer; he had played for Spanish La Liga Club, Southampton and Tottenham Hotspur. He began his
professional career at Southampton before he moved to Hotspur in 2007 and gained international fame in 2010-2011 UEFA Champions League. He was Professional Footballers Association (PFA) Player of the Year in 2011 and 2013, and was a member of UEFA Team of the year in 2011. With many awards in his kitty, it is understandable how he has become a target for hire by one of the most respectable football clubs in Europe, where soccer is a glorifying game, as well as business.
On Saturday, in his first game a Real Madrid player, Bale scored a goal in a draw match with Villarreal. Bleacher Report in a story headlined,
‘GIF: Gareth Bale Scores Debut Real Madrid Goal against Villarreal,’ wrote, “It has been a while since we last saw Gareth Bale heart celebration, but it was out on Saturday night as the $86 million man scored in his Real Madrid debut against Villarreal.”
Of course, Real Madrid was down with one goal to Villarreal, and the equalizing goal came from Bale. It is certainly the beginning of a return on investment (ROI) for Real Madrid and a justification for Bale’s transfer.
Comment Form is loading comments...
NEWS AND FEATURES
News & Features Around The World