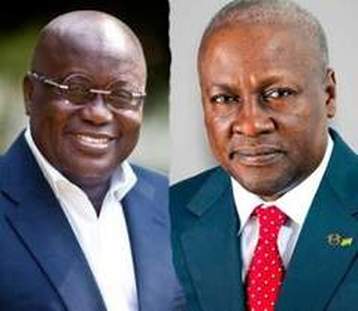 Akufo-Addo and Mahama
Preparations for the December 7 election in Ghana may have run into a hitch on Thursday with the late arrival of voting materials to the Ashanti Region and detection of what the opposition team describes as intentional error on the ballot paper, the Ghanaweb has reported.
According to the reports, the vehicle that conveyed the election material broke down following mechanical problem and kept party officials from 47 constituencies waiting for hours.
When the materials were checked party officials, the opposition discovered that all other parties had their logo and initials on the ballot, except the major opposition party that has just its logo on the ballot without its initials, the report said.
Consequently, the report said that the opposition party chairman, Bernard Antwi Boasiako, called for complete overhaul of the election procedure.
It is not certain whether the election will go ahead as planned or shifted as a result of the opposition's request. People who are privy to situation in Ghana describe the reported breakdown of the truck conveying the voting materials and the error detected on the ballot as part of the corruption that have eroded the citizens' confidence on the sitting government led by John Dramani Mahama.
The battle line is drawn between two men, the incumbent president, Mahama, and Nana Akufo-Addo, representing the ruling party and the major opposition party respectively. Observers of events in Ghana see events in the country as taking shape that the world has witnessed in Nigeria, where  Akufo Addo like Muhammed Buhari, is having his third run, having lost twice, and challenging an incumbent, who became president from the vice president's position, following the death of the principal incumbent, John Atta Mills in 2012.
Mahama is campaigning on the strength of his achievement in domestic programs against the view by many observers and opposition members that the Mahama's government has been tainted by large scale of corruption. But he has reportedly opened the doors for the media to showcase his achievement against his detractors' view of seething corruption in the country.
NEWS AND FEATURES
News & Features Around The World