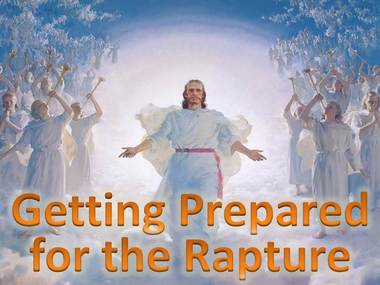 www.divinerevelation.info
Everyone seems to be in a hurry these days and one will almost make a mistake to connect development to be a rapture scenario, and that everyone wants to make the heaven, irrespective of whether one is or is not a Christian. This summation comes from interviews in New York about whether interviewees are Christians or not.
Aside from views expressed about the way things are done in a rush by a large number of people, the interviewer is advised that if he is a Christian, he must ensure he lives according to the scripture. Many people interviewed say they don't just believe going to Church is enough to convince them about someone's character. They want to see and confirm that the Church goer is living what he is taught in the Church.
Live according to the scripture in the modern jet age? Would not that be in conflict with the racing to nowhere all around us today? What the interviewees mean is that many people go to the Church and say they are Christians, when their lifestyle don't suggest they are. One interviewee asks if the interviewer knows Bernie.
When asked if Bernie Sanders, the interviewee interjects with a question whether the interviewer just arrives the United States and he does not about Bernie, whose money making wizardry makes more popular than the political Bernie. He then asks if the Bernie in topic is not a Christian and say that there are many people in Bernie's shoes out there and that they also go to Church.
This then brings to the climax why many people go to Church today, either to seek a way for miracle to be rich or have a miracle to get release from one infirmity or the other. And the unlike Christ who told people he healed not to announce the miracles, today's pastors will greatly announcement of miracles, to bring in more people to ensure enough offering and diverse gifts are coming towards owning a jet.
Thus the words of the scripture that says "We bring nothing into this world, and when we leave we shall take nothing out of it" is now being translated to mean that "We bring so much into this world, and when we leave or after we may have left, the world we know we have been here." Don' t blame the people that attend Church for their selfish needs or the pastors, who want miracle publicized to draw large number of followers as a way to make their own money towards owning their own jets or fleet of cars and mansions.
Blame the changing world! Is the world not changing or has the world not changed? Is it the same it is today like the time of Christ? Is the Pope too not grappling with the changing world by taking the Catholic Church on a journey to be at par with the world, than working to right the wrongs in his Church, the wrongs that have paved the way for emergence of new Churches and new pastors? Are people not describing the new Pope as a jet age Pope, because he is making the Church to align with the world around the Church?
One thing people have not said about the Pope's new insurgence is that what has been lost by the Church cannot be gained back by Church's act of aligning with the world. The scripture enjoins Christian to live by the world and not to be like the world. But the truth is that the changing world is making it difficult for many Christians to live by the words and not align with the world. Many people have forgotten about Bernie and the Ponzie scheme.
Bernie was not born with the Ponzie scheme. It must have been in the bid of grappling with the changing world that he got caught up with his Ponzie. Do you blame the pastors and everyone, who want to be noticed as being here and alive, and have aligned with the world? If you are allow the world to get you, the way it has got the Ponzie scheme owner, whether you are a pastor or a commoner, you will not make the rapture, because the scripture says that only true believers will make it.
NEWS AND FEATURES
News & Features Around The World