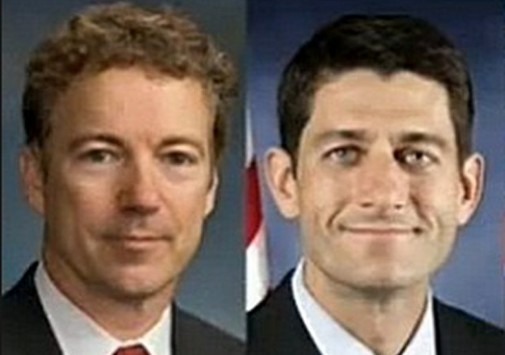 Senator Rand Paul and Speaker Paul Ryan (Courtesy: PoliticalPistachio)
Rand Paul does not think the legislation for the new American Health Care Program will pass through in the Congress. But Paul Ryan, the House Speaker thinks otherwise. Rand Paul calls the new American Health program Obama Care-Lite, because according to him, the program still have vestiges of  Affordable Care.
But news reports said that President Donald trump is very happy over the availability of a legislation to repeal and replace Obama Care, in support the House speaker. Against Rand Paul and others like him in the Congress, who also think that the new American Health Care program legislation still needs to be perfected.
The Congress has been in session for 24 hours deliberating on the new American Health program legislation to ensure it is fine tuned and passes the Congress. Of course, no one would have expected that the Congress will agree on the content of the legislation without some forms pf disagreement and debate. What is happening right now is showing that the Congress is busy working on the new legislation.
Already, the Democrats led by Nancy Pelosi is against the new legislation, making some observers say it is Pelosi vs. Trump. Pelosi is against the legislation, which Trump has told his party members to forge into a bill and bring on to his desk to be signed into law.         How this turns out will be determined on the outcome of the debate in the Congress.
However, the debate in the Congress and the disagreement by some Congress members from both parties does not necessarily mean the end of the legislation or that it will not pass. The hype over the disagreement should not be seen as final, since the speakers and his supporters of the new legislation are also working to convince dissenter members to support the new program.
Both Senator Paul and Speaker Paul had appeared on the cable television network and spoke about their respective position to the public over the new health care debate. Senator Paul spoke about why he felt that some Congress members may not go along with the new legislation. While Speaker Paul had lectured the public on what he called discussion on the Obamacare Replacement bill.
The public waits for the direction the debate on the health care bill will take. One thing is clear about the name of the new health care: It will be American Health Care and not Obama Care. Will this mean obviating Obama's name? Is Obama and the Democrats fighting to avoid obviation of Obama's name or to ensure that Americans have a better and manageable health care? Are the Republicans fighting to obviate Obama's name or replace the health care to give Americans manageable health care?
​    As Congressmen and women, the goal must be to give Americans a better and manageable health care and the debate and the result must be so oriented. The so called more Conservative group in the Congress should not seek more than to give Americans a manageable health care, since the negative song about Obamacare is that it has become a burden and unmanageable.
NEWS AND FEATURES
News & Features Around The World