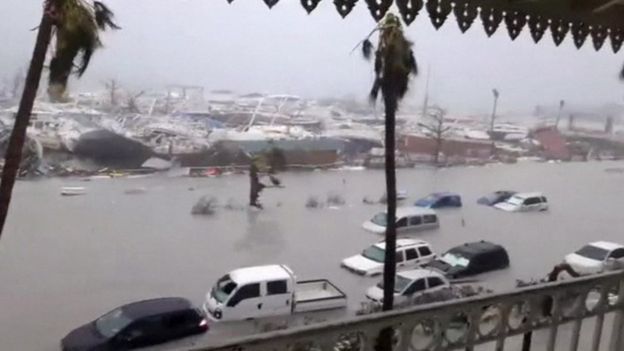 The flood from excessive rain and flooding from water gush from the sea following hurricanes' landing.
Two deaths were recorded as Hurricane Irma landed and hit Florida as Category four, and downed  to one heading inland toward other states.
Of course, major news reports in the West still had Irma's rough landing and its impact on the Florida's environment as lead story on Monday morning.
It has become manifest that when the hurricanes take off from the sea with all their ferocious power, they travel with such megawatts of force, humbling every structure on their path.
​   Their powers are gone by the time they arrive landfall in the United States causing their havoc.
Noticeably they down most structures, including electric poles carrying power cables and causing widespread blackout. Secondly, they bring excessive flood through excessive rainfall. The wind that travels with them causes damages to structures, and humans - who refuse to hide away.
The flood from excessive drowns humans and causes excessive much damage to structures, leaving survivors and government to begin repair work after the hurricane's evaporation into the thin air. It is a case of once beaten, twice shy. Hurricanes have their first laugh at first landfall, enabling humans to study its characteristics.
After the first landfall and excessive damage and high number of casualties, and humans have learned that evacuation is a necessity, number of casualties is seen highly reduced. But there is little or nothing to do to reduce the flooding from the excessive rainfall, which only well constructed gutters can mitigate, as flood in Houston was seen reducing the second day of Harvey's landfall.
The evacuation order worked well in favor of Miami-Dade county residents in Florida, helping the county and the state to escape high human casualties. It is expected that human casualties will remain low as the people and state go about the business of repairs and rebuilding of structural damages caused by Irma.
Honor must be given to the work of nature that enables most Palm Trees to stand dancing with their tops bowed amid the ferocious winds brought by hurricanes.
Widget is loading comments...
NEWS AND FEATURES
News & Features Around The World