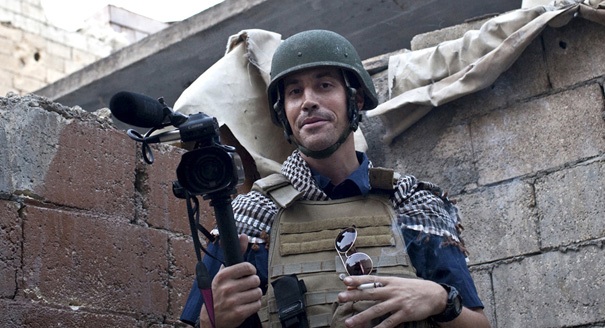 James Foley
News of beheading is rare. So the reason James Foley's fate in Syria on Monday shocked the world. Despite knowledge that journalism - especially for war reporters - is almost becoming equivalent of death.
War is death and when one chooses to go to war, possibility of dying is real. But beheading even a soldier, not to mention an umpire a journalist represents in a war, is a crime against humanity.
The ISIS militants for beheading Foley and threatening to do same to another journalist in their grip is an unforgivable crime as enumerated by President Barack Obama in his reaction, and continuation of Journalism's burden of having its practitioners as sacrificial lambs for truth in a society that hates the truth.
The difference in Foley's fate and other Journalists who have been killed in war is the manner of Foley's  death by beheading. Almost all the time journalists get killed covering crisis, and when they are not getting killed, they are arrested and jailed, all for seeking the truth to be reported to the society. Whether in Pakistan, Afghanistan, Syria, Libya and Iraq, all places envelopes by crisis, journalists are required to seek information for the society to be appraised of developments. They interact with combatants on both sides of the fiasco for balanced information careless of the danger to their lives. Most of the journalists take the offer to cover wars for the interest they have in reporting crisis and adventure and not how much would accrue to them in term of monetary gain. Leaving family and loved ones to embrace danger.
The moment a journalist chooses the profession, the sense of understanding that people get killed on the job is the first trouble to struggle with it. Even when you are not killed, the discomfort of standing for the truth begins with maneuvering employment conditions of having to abide with the wants of an employer who may not be a journalist, but a business Mogul  -  whose primary motive may either be to make money or advance a political ideology. From the office, the journalist begins to report with carefulness to step on toes of government personnel and people in public authority who don't want skeletons in their cupboards in public sphere. The cause of the journalist's problem is not about any other factor, but seeking to report and tell the truth, which one hardly see people doing without scars.
If human society loves the truth, Jesus Christ and most of his successors would not have been killed for preaching nothing but the truth. They preached to the world that the will know the truth and the truth with make the world free. The same fate that had befallen them as propagators of truth is befalling journalists of modern era. The repercussion to the world is that the world seeks freedom from all forms of sicknesses, but the sicknesses - whether political or economic - are multiplying, because the world does not want the truth.
With his camera, Foley filed information about the truth of the war in Syria. But the militants feel the truth is injurious to their cause; that Foley as an American does not represent their interest but that of their enemies, and other reporters who have been killed like Foley for his job become victims of militants' ignorance.
NEWS AND FEATURES
News & Features Around The World