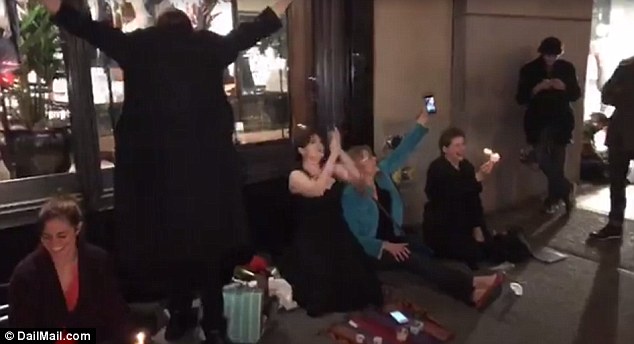 You may have read the two major Holy books, and read about other religions in your Philosophy class, during your college days.
By the knowledge that you may have have acquired through this process,  you will know that all religions' adherents, believe in one God, who occupies the top of the hierarchy and other lesser gods below, and that all religions represent good.
Though, there are other people, who still believe in the worship of the lesser gods or who go through the lesser gods, believably to get the attention of the omnipotent, omnipresent and omniscience God.
Anyone who has read the Bible and the Quran and who has the knowledge of other religions cannot be in shock for reading about how witches congregated in front of President Donald Trump's tower in New York City on Friday night, with intent to cast spell on him, to derail him and his government, because they believe that Trump represents evil or that he is evil personified, as his opponents and their supporters have been trumpeting to the world. Unexpectedly too, many supporters of Trump's  opponents accept their political mentors' opinion, because they have fallen out of political favor, following their trouncing not just by Trump in the presidential election, but also by the Republican Party at other levels.
For Trump's political opponents and their supporters, the Democratic Party for which they are members and themselves, are good. Many of the liberals believe that the Republican Party too is evil.  And some of them have tried in words and writings, to separate Trump from the Republican Party, asking the Republican Party in the Congress to move away from Trump, to work toward his removal, and in which ever they can.
All the occurrences since after Trump's political victory and his opponent's reactions to his victory seem like a drama. And the seemingly dramatic act is not just beginning. The world witnessed its beginning from the election campaign period, the election and the outcome of the election. The act has continued with the loss of election and disenchantment of the opposition over the loss.
The latest act in the episode is about the witches' congregation in front of Trump's tower in New York City and with intent to do evil. It is a quick remembrance of the battle between Prophet Elijah and the evil prophets, part of which is recorded in the holy book, about the contention between Elijah and others about the true and false prophets, the testing of their different powers to proof the one approved by God, and Jezebel's declaration of war against Elijah, for his ordering the killing of the entire false prophets in Israel.
Ahab as a king in israel in the time of Elijah had surrendered to the supremacy of the God of Elijah, but his wife Jezebel did not or refused to respect the wishes of her husband. She believed that as a witch and king's wife, she had the power to destroy Elijah for ordering the killing of the false prophets. She not only declared war against Elijah, she also made her husband seized Naboth's land and killed Naboth for asking questions over the seizure of his land!
But the word of God rang out that the same dog that licked Naboth's blood, after he was killed, over his question about his land requested by the Ahab, the same dog will lick Jezebel's blood. The death of Jezebel and the licking of his blood by a dog as declared in the words of God spelled doom for witchcraft, because the Bible says that it is not by power or might, but by the grace that those who are saved are saved. The second time Jezebel lost power, her apostles - the false prophets - having lost power, when they called on their god at the request of Elijah and their god was silent and without any occurrence.
Many religion adherents have no longer respect for witches. How then that these same witches have to come out blaspheming, when the Democratic Party protests and demonstration have quietened? Is it that they are saying the protests and demonstrations have been ineffective and they want to be given a chance to use their power and might to help liberals? Don't they know that Trump's emergence as president is not by power or might, but by grace?