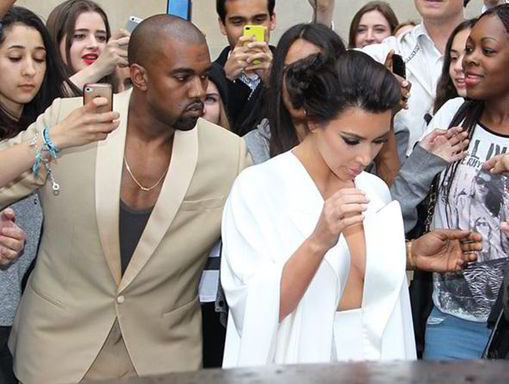 Kim and Kanye prior to vow (Courtesy: www.cdnimageexpress.co.uk)
Every writer familiar with Ernest Hemingway's first work The Sun Also Rises on hearing about Kim and Kanye's marriage in Paris will remember the group of Americans in that piece of literature and their journey to watch a Bullfight. Apart from the group of Americans who went for the Bullfight in 'The Sun Also Rises', there was also the group of American writers who chose Paris as their home beginning with Richard Wright, James Baldwin and Ernest Hemingway as a United States' serviceman and reporter.
Apart from a near future possibility of a report on the lives of American great writers in Paris, the choice of Paris by Kim and Kanye for the celebration of their marital bliss rekindles the story of love affairs and characters in The Sun Also Rises; what people are saying about Kim and Kanye's marriage and the popular saying about seeing Paris and die.
Already Kim and Kanye have hurdled past the dangerous precepts set by Jake Barnes and Lady Brett Ashley's relationship in The Sun Also Rises. The two major characters in The Sun Also Rises were never married, but unlike them Kim and Kardashian had married, according to news reports and they did it in Paris.
Not many people believe in the longevity of the relationship between  Kim and Kanye, and with the memory of the freedom of Parisians and attitude to marriage and one of the demonstrations in The Sun Also Rises,  one will understand why some people - including soon to be retired David Letterman - think that Kim and Kanye were getting married in Paris, and expected the divorce to be in Mexico. Everyone knew that Letterman's pronouncement was a joke, characteristic of his late night show- to make people laugh and wonder.
But Kim and Kardashian will be doing themselves a favor to keep long distance from the type of lifestyles chronicled in ﻿The Sun Also Rises, ﻿to avoid negative results of the type Hemingway was critical about in his master piece, showing the danger of living a life hampered by experience of war and desires of an unfortunate woman, whose sexual life was endangered and as a result became a porn between Jake and his friend, Robert Cohn. The Sun Also Rises was published in 1926 and at the time analysts close to the author linked the content to portrayal of a lost generation. Can that still be applicable today?
Some people look at Kardashian based on her past marital experience. While some others believe that she loves Kanye and it is why she has chosen to have a child for him. With the marriage between the two officially solemnized, Kim and Kanye are telling the whole world that they are in love, and that observers should believe those who believe they are in love and not people who think their freedom loving and living lifestyle will be an impediment to a happy union.
But one looks at the photographs of the couples reliably shot prior to their vow, Kardashian seems like someone in space -who does not understand what is happening around her. It makes one to ask whether she still is wondering about what she is stepping into like one who requires prayers from family and fans.
Comment Box is loading comments...
NEWS AND FEATURES
News & Features Around The World