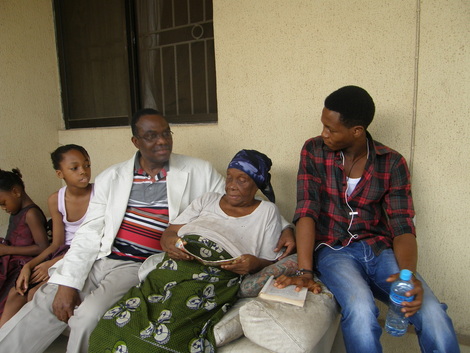 My last meeting with my mother June 2012
The transition from 2012' to 2013 witnessed my family members in prayers for my mother's survival from a sickness for which she was hospitalized from late December. But we were not so fortunate as my mother breathed her last early morning January 8, 2013.
It was how we began the year 2013 - planning a funeral for my mother. It was a period that John Donne's popular poem, "Death Be Not Proud" stared me on the face. But I could not tell death it shall die, because I knew that several years after Donne's stinging reaction to death for taking his wife, death had killed many more and death was still alive.
I thought it was wiser to avoid the paradox and the irony. and confronted the matter about life and death. My mother died at 87. I had been part of her struggles, triumphs and losses just like her other children that survived her. When I lost my eldest brother - Dele Giwa - to a letter bomb in Nigeria in 1986 and the greatest loss to my mother and the family, I knew how my mother confronted the loss, by spiritually ensuring that none of her existing children would suffer such fate again and she succeeded.
Twenty seven years that she lived after my eldest brother's assassination, my mother did not suffer any loss of a child again but her own departure last year. I had thought that my eldest brother's death had thought me a lesson about the reality of death. but my mother's death reaffirmed it. That life is real and death is also real. It thought me that no one will live forever in contrast to my knowledge as a child.
As a child, I witnessed neighbors mourning the death of an old man who was himself a friendly neighbor. The mourners sang, "Eko Lore, Ibadan lore, o fe de." The song means that the old man has traveled to Lagos or Ibadan and that he will soon return. But later after that song, I strayed into the large sitting room where elders were dressing for the deceased for his final journey; I was asked to get out and this was followed by conveyance of his body in a casket to the back of the house for interment. I asked myself at the time that why were they burying the body of a man they just said in a song had traveled to Lagos or Ibadan and would soon return.
Thus when I was confronted with dissecting Donne's poem in one of my undergraduate literature classes, I was able to analyze Donne's poem as a feeling expressed for the loss of a loved one. However, the class professor gave an in-depth lesson on what happened to Donne, his literary life, his marriage, the number of his children from the marriage, the loss of his wife and how he felt losing her with him only to care for 12 children and why he thought death would one day die and leave humanity alone. But the one knowledge I grasped from Donne's experience was his later conversion to a minister of Christ words and the influence this had on his poem vis his knowledge of life after death based on the Holy Bible that he employed on his attack on death.
I believe in the words of the Bible, but I don't think allowing evil to visit young innocent children like Uriah's child to David, while their parents are alive is justifiable and nor will I understand why a woman like Donne's wife will die and leave the man to care for 12 children. Yet, such and others that are worse happen everyday to humanity. People die when life seizes irrespective of age, and like Loiuse Zhou said in one of her recent Facebook postings, we have no choice than accept. I accepted my eldest brother's death, when he was murdered and left vengeance to God. I did not have a choice than accept my mother's death at her age. I believe that based on the words of God, mother dies,yet still alive.
Tuesday, 7 January 2013, I had arrived home late from work; went to bed and left my cell phone in my jacket's pocket. When I woke in the morning about 5.00 am and checked my phone, I had missed more than twenty calls from my sisters and elder brother. I knew the anticipated had happened - my mother had passed.
I thank God for her life; her achievements, contribution to humanity - for bringing us here - ensuring our survival, especially her determination that none of her children would pass again with her alive after the first sad experience.
Comment Form is loading comments...
NEWS AND FEATURES
News & Features Around The World