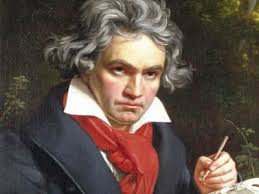 Ludwig Beethoven
,    What is music?  Most of us will readily say, "It is the food of love", because Shakespeare has said so in one of his plays, "Twelfth Night". Aside from Shakespeare's reference to music as the food of love in the Twelfth Night, there are also scriptural references in the old testament about the role that music played in the affair between King Saul and the little boy David. King Saul was sad and he wanted something to relieve his sorrow and he asked a musician to be fetched to play for him. The same happened in the Shakespeare's Twelfth Night with King Orsino's sorrow over the love of a woman who would not recompense his love. The same is happening in modern day to seek music as remedy whenever we are sad.
Historically, music transcends tribal and religious boundaries. It in fact plays an important role in religion and tribal ceremonies. Rarely there ceremonies that can be completed one form of music or another. Music is the elixir humans need to move their dancing feet. it is the dancing with the stars or paupers. No human can claim to hate music. No matter how sadistic a person or dangerous a person, he or she will have a type of music he or she enjoys, and a time to unwind with his or her type of music.
A lesson in music appreciation shows a musical beginning, which developments allies with that of poets' early times, with performance in the royal court and the exclusion of the commoners. it is here one comes across names like Wolfang Amadeus Mozart as a pathfinder, Thomas Hayden as a great name and Ludwig Beethoven as follower in the steps of Mozart and Hayden, but greatly improved on his predecessors' achievement. What the trait in their life histories show is that greatness in the art of music has nothing to do with age and it still shows up to the modern time that music and youthfulness goes together.
But aside from the universally known musical personalities, there are thousands of locally acclaimed musicians known just in their localities, because music, language, ability to understand the compositions  are inseparable. Musicians who have become universal household names sing in universal languages or their compositions have been translated to numerous languages. A musician whose composition is in Spanish would have his audience limited to Spanish speaking people, while the same is applicable to German, Dutch, Russian and French speaking musicians. One great exception seems to be the English speaking musicians.
Aside from the language, which essentially differentiates musicians and the size of their followers, the form of instrumentation a musician employs in his or her music also determines the attraction their music enjoys. The is  where the Jazz music comes in and how it has walked from its root in Africa to become greatly embraced all over the world. "By 1808, the Atlantic slave trade had brought almost half a million Africans to the United States. The slaves came largely from West Africa and the greater Congo River basin, and brought strong musical traditions with them.The African traditions primarily made use of a single-line melody and call-and-response pattern, and the rhythms had a counter-metric structure and reflected African speech patterns."
This information from Wikipedia is illustrative of a deeper lesson from the school of music, which says that slaves are the source of jazz into the new world.  It further  illustrates that you can take everything from a human being, but as long as a person still has a breath of life, he or she is capable of some extraordinary engagement. Chained and manacled, but they were still capable of exuding joy. What is music, if it is not expression of joy? What was king Orsino seeking to encourage when he asked a musician to be fetched following unrecompensed love?, And what was King Saul seeking, when he asked that a musician be sought to save him from drowning in sorrow?
Music never resolved Orsino's problem, but rather said that the musician should play on, if music was the food of love, and continued his search for love, and fell Viola in what the Christians' tradition will carnality. In the same vein, King Saul failed to get healing from music and instead became jealous of David for the fame that playing music for King Saul brought him. The Kings, entertained by early musicians bought joy derivable from music with money, which commoners could not afford.
But when Beethoven discovered that more money could be earned playing for the commoners than relying on the royal courts, he seemed to have said that he  had  given the royals the joy, that he also deserved joy earning more and enough money beyond what he had earned from the royal courts, prior to his taking the music out of the royal courts to entertain the commoners. When Beethoven decidedly stepped out of the royal courts to entertain the commoners, he was least aware that the Jazz music would be taking root as a product of the commoners.
Today, there are all sorts of music, just as there are all sorts of musicians earning money at a level beyond their predecessors. Many are in the camp of celebrities for the fame that music has given them. They are happy entertaining and they are receiving the reward of abundance wealth and fame in return. Well, there can be no other way to encourage them than to say "If music be the food of love, play on", as most lines in modern musical composition are about falling in and out of love and the emotions, but it is certain that peoples' dancing feet are ever ready to demonstrate appreciation to the melodious tunes.