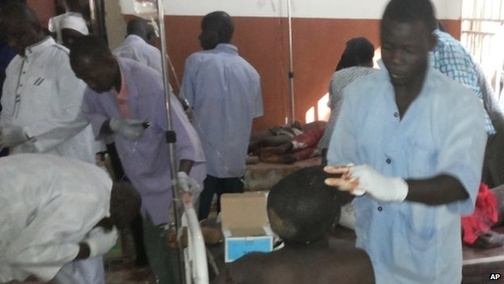 Student victims are being treated in a hospital
﻿A  bomb detonated by a bomber in a school assembly session in Potiskum, capital of Yobe State in the North East of Nigeria, had killed 48 students, mostly children.
Reports revealed that the bomber disguised in the  school's uniform and mingled with students in the assembly.
Eye witnesses reported confusion and soldiers rushing in to help victims, but that the soldiers found angry people stoning them for their inability to stop continued human carnage by Boko Haram.
48 innocent children who had left home and bid their parents bye on a journey to school with a hope of returning home had been sent to untimely and painful death. Potiskum is one of the most affected areas in the North East of the country, where Boko Haram has been decimating innocent lives. Just a week ago, 30 people were killed by a suicide bomber in a religious procession. ﻿
NEWS AND FEATURES
News & Features Around The World